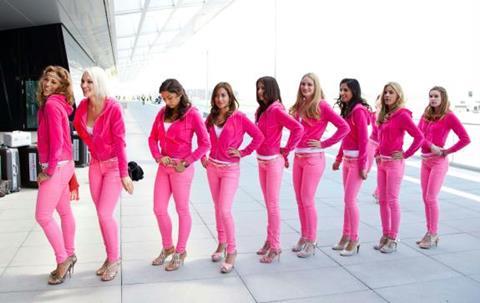 Michael Steiner’s new film Miss Massacre (Das MIssen Massaker) looks for all purposes like the unhappy marriage of a lowbrow reality show and an inane slasher comedy, hopelessly pretending to send up both genres.

Consisting mostly of girls in bikini running around and screaming their heads off every time they look at another blood-stained prop.

It would be difficult to determine what made two highly respected production/distribution houses such as Constantin Film (the parent company of the producer, Kontra Filmproduktion) and Film Coopi join forces in this case, but if it is indeed for commercial purposes, it remains to be seen whether the German-speaking audiences apparently targeted here - judging by the particular use made of the Swiss-German dialect - will embrace a theatrical release that is inferior to the subjects it claims to parody when they can stay home and watch the originals for free.

Consisting mostly of girls in bikini running around and screaming their heads off every time they look at another blood-stained prop, this tale of local beauty queens taken to an exotic island (part of the film was shot in Thailand) before they reach the national finals, is neither funny, daring, nor intelligent enough for anyone to care about the fate of each of the beauty queens, before or after they are relieved of their duties and eliminated from the screen by a mad murderer whose motives are unclear.

As for the bevy of professional beauties cast for the quality of their curves, among them cover girls, Playboy centrefolds, TV show participants and some with a modest film record as well, all they are required to do is bulge their eyes almost out of their sockets and emit very loud noises every five minutes or so. The rest of the time is spent walking or running up and down the sets, to show off their figures to best advantage.