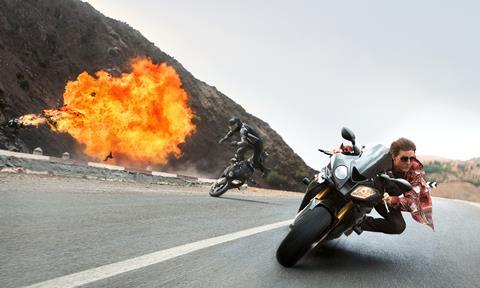 Released on September 8, Mission Impossible: Rogue Nation was the second Hollywood tent-pole to open after the two-month summer blackout of foreign films.

Jack Ma’s Alibaba Pictures, the filmmaking arm of ecommerce giant Alibaba, is an investor in the film as well as the official promotional partner for China.

Cruise, along with director Christopher McQuarrie and actress Rebecca Ferguson, visited Beijing and Shanghai to promote the film.

Universal animation Minions also had a big opening, grossing $18.85m and taking second place for the week September 7-13, after just one day on release (Sep 13).

Monster Hunt remained in fifth place with $2.8m for a cume of $381.86m after 60 days. Edko Films’ hybrid of live action and visual effects has finally surpassed Furious 7 to become the highest-grossing film ever in China.

Rounding out the top ten was Fly To The Venus, which grossed $0.58m over its three-day opening weekend. The new release is a Chinese romance fantasy film directed by Deng Ke and produced by Orange Sky Golden Harvest Entertainment.