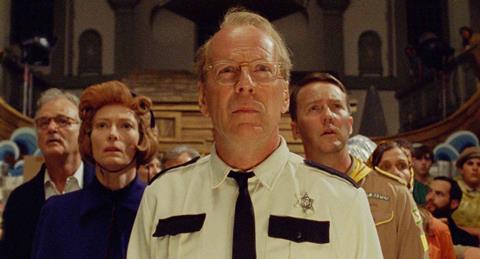 The enchanting sweetness of director Wes Anderson’s 2009 foray into animation, Fantastic Mr. Fox, has been transplanted into his return to live-action filmmaking, Moonrise Kingdom, a delicate period love story whose slightness is mitigated by its deep feeling. Those who have complained that Anderson makes the exact same twee, precious, mannered deadpan comedy every time out will have plenty here to further their argument, but this bittersweet bauble so confidently goes about its business that it’s difficult to deny that Anderson knows his milieu and how to dramatise it eloquently.

Anderson’s new movie again demonstrates that the emotions are all there under the tightly controlled surface.

After serving as the opening film at this year’s Cannes Film Festival, Moonrise Kingdom will be released May 25, and it seems safe to assume that it will cater to the exact same niche art-house crowds that previously embraced Rushmore and The Darjeeling Limited. Boasting his starriest cast since The Royal Tenenbaums, this Focus Features offering probably shouldn’t expect significant box office boost from the presence of Anderson newcomers Bruce Willis and Edward Norton, but its positioning as the prestige release of the long Memorial Day weekend could help its theatrical returns.

Moonrise Kingdom takes place on a small New England island as the summer of 1965 is drawing to a close. Two pre-teen misfits – orphan Sam (Jared Gilman) and troubled Suzy (Kara Hayward) – fall for one another and decide to run away, which sparks a pursuit from Sam’s camp leader (Norton), the town sheriff (Bruce Willis) and Suzy’s parents (Bill Murray and Frances McDormand).

A quick plot synopsis of Moonrise Kingdom will perhaps bring back memories of previous Anderson films, whether it’s the precocious underage protagonist reminiscent of Rushmore or the family dysfunction that’s been a central theme of all his work. The comparisons are obvious and inevitable, but if they do dull some of Moonrise Kingdom’s novelty, it’s also important to note how Anderson has refined and deepened his approach over time to allow for a more layered emotional resonance in his pictures.

Although the film has an impressive cast of indie-minded actors, Anderson puts most of Moonrise Kingdom’s emotional weight on the shoulders of two relative unknowns. Initially there’s a concern that Gilman and Hayward simply don’t have enough presence to carry the story along, but soon it becomes apparent that, unlike Rushmore’s hyper-articulate and competitive Max Fischer, these new characters are more withdrawn and introspective. Consequently, their bond is less about being soul mates than it is about a shared sense of being outcasts. Anderson and his co-writer Roman Coppola leave Sam and Suzy a bit underdeveloped, which robs them of some personality but at the same time makes the reveal of their darker impulses all the more shocking and unsettling.

Indeed, Moonrise Kingdom sails along beautifully when Anderson focuses on their courtship. Working with his long-time cinematographer Robert Yeoman, the director succeeds in turning young love into precisely the intense, transitory, impossibly idyllic sensation it can be in real life. Utilising the Rhode Island locations to good effect, Moonrise Kingdom is like a live-action storybook of open skies and empty terrain in which Sam and Suzy can run free, creating a new life away from the sadness of their previous existence. Very consciously, Anderson signals the fact that this Eden can’t last, which gives the film such poignancy.

Interestingly, it’s when this comedy spends time with its more famous cast members that things get a bit wobbly. The adults aren’t meant to be Moonrise Kingdom’s central characters, but their involvement tends to drag down the story rather than elevate it. On one level, this seems intentional, as Anderson contrasts the almost magical enchantment of Sam and Suzy’s getaway with the mundane foibles and failings of the grownups around them.

But the problem comes in the fact that the filmmakers haven’t done enough to provide definition to these supporting players. Murray and McDormand are fitfully amusing but nothing more as Suzy’s lawyer parents, too wrapped up in their work to properly address her emotional troubles. Likewise, Norton and Willis give likable performances as ineffectual male role models for Sam, but there’s not enough comic inspiration underlying the characters. Anderson clearly wants us to concentrate on Sam and Suzy, but one wishes he didn’t do it so much to the detriment of everyone else on screen.

Because this is Anderson’s first film since venturing into stop-motion animation for Fantastic Mr. Fox, it’s natural to wonder if the visually distinctive auteur would switch up his style at all now that he’s returned to live-action. But the long tracking shots, detail-heavy production design and quirky costumes remain very much in effect.

Because he also engages in the same brand of understated, ironic comedy as he’s done so much in the past, there can be temptation to accuse Moonrise Kingdom of insincerity or standoffish-ness, but Anderson’s new movie again demonstrates that the emotions are all there under the tightly controlled surface. Specifically, they come through on the faces of Sam and Suzy, who seem to have gone through life trying to protect their delicate feelings from the outside world. Gilman and Hayward don’t give bravura performances – their characters are too minor-key for that – but their shared melancholy creates its own spell.

As the chase escalates to find them and the young lovers have to decide what to do, Moonrise Kingdom starts to get bogged down in plot busyness and forced comic situations. But what remains is a sense of sadness about how fleeting happiness can be. It’s ironic that such a feeling occurs in a film in which its great central story sometimes gets lost amidst the large ensemble cast.