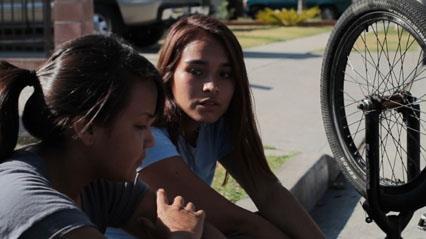 A sweet, slight story about two teen girls whose friendship may lead to more, Mosquita Y Mari is so delicate it practically evaporates into the air. But that doesn’t mean that this modest tale – written and directed by first-time feature filmmaker Aurora Guerrero – doesn’t leave behind a lovely, melancholy impression.

Mosquita Y Mari debuted in Sundance’s NEXT section, and it seems likely the film will move along to other festivals, with some chance of niche theatrical release thereafter. Because of the movie’s budding (but unspoken) love story, there’s a possibility Mosquita Y Mari may be pigeonholed as a “gay film,” which (as demonstrated by the recently well-reviewed but commercially meagre Weekend and Pariah) could limit mainstream audience interest, especially without the benefit of stars.

Set in the Latino-centric Southern California city of Huntington Park, this sensitive drama looks at seemingly different high school students: studious, shy Yolanda (Fenessa Pineda) and the more attractive, confident and rough-around-the-edges Mari (Venecia Troncoso). After a friendship blossoms, Yolanda begins to feel subtle stirrings for Mari, which seem to be reciprocated but never expressed or acted upon.

Guerrero has called this story semi-autobiographical, which is no surprise to the viewer given how much affection she shows to both the characters and the setting. Even though the plotting is a tad predictable – very much following the coming-of-age template – there’s an abundant generosity of spirit to the film that suggests that, even if Guerrero is a little too close to this story, she knows how to make us care about what happens in it.

The Huntington Park settings give the film not just a sense of place but also provide a glimpse into the lower-income lives that are at the heart of Mosquita Y Mari. Indeed, both of these young women are facing financial pressures that help inform the decisions they make. (For Yolanda, it’s never-ending harassment from her parents to get good grades so she can go to college.

For Mari, it’s the demands of finding extra money to support her single mom.) Without overselling this element, Guerrero suggests how economic woes both bond the two characters while at the same time drive a wedge between them.

Pineda and Troncoso give relaxed performances that don’t demonstrate a lot of range but quite capably nail the twitchy angst of adolescence. Mosquita Y Mari never definitively defines their friendship – is there a deeper sexual longing, or is it simply the confusion of hormones? – so credit is due to these young actresses for walking a dramatic tightrope that requires an impressive amount of nuance.