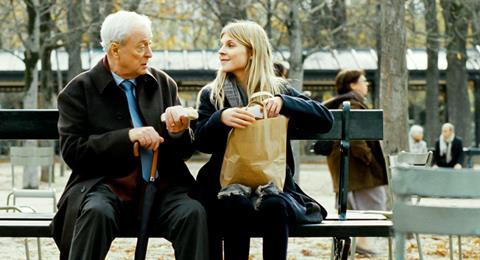 The delightful pairing of a classy Michael Caine and an enchanting Clémence Poésy helps give the delicately dramatic Mr Morgan’s Last Love just the right amount of sophisticated elegance it needs. A little too languid and repetitive at times, it is still a gently moving and grown-up film that lingers rather than assaults its viewers with visual extravagances.

An engaging cross-generational tale, the film is at its best when it dwells on Matthew and Pauline and they grow fonder of each other and offer a sense of family both yearns for.

Based on Francoise Dorner’s novel La douceur assassine, the film, which had its world premiere at the Shanghai Film Festival, also screened at the Locarno Film Festival. Written and directed by Sandra Nettelbeck – who made Mostly Martha in 2001 and Helen in 2009 – the film’s gently paced drama should appeal to older audiences, while the casting should click internationally. The film also feature terrific cameos from Jane Alexander and (especially) Gillian Anderson.

The book’s lead character has been changed from French to American (meaning Michael Caine wields his US accent), and while this leads to a few clumsy gags about his lack of French it also helps emphasise his sense of being alone in a city that he loves but can’t quite be at one with.

Matthew Morgan (Caine) is an American widower living in Paris finding it hard to get over the death of his wife and who mulls over suicide. On a bus he happens to meet Pauline (Poésy) a disarmingly compassionate and thoughtful young woman who helps him and strikes up the unlikely of friendships with this stubborn man who has grown weary of life.

Her positive take on life and their mutual need for companionship sees them embark on sweet-natured relationship as they wander Paris and enjoy lunches in the park. It is a relationship that teeters on romance (and certainly there is a sense that he falls in love with her) but is closer to the notion of a supportive family than an affair of any kind.

But when he is hospitalised, his grown-up son Miles (Justin Kirk) and daughter Karen (a excellent Gillian Anderson…who you wish was around for more of the film) fly to Paris, to try and rekindle their fractured relationship with him and also to try and convince him to return to the US.  The film subtly changes direction again as Miles stays on in Paris as father and son must finally come to terms with issues of the past, with Pauline a warm-hearted presence who tries to help each man find love for each other.

An engaging cross-generational tale, the film is at its best when it dwells on Matthew and Pauline and they grow fonder of each other and offer a sense of family both yearns for. The final third, and the Matthew-Miles coming together feels more clichéd and predictable (and rather strung out), especially during an uncomfortable shouting-match in a restaurant.

Mr Morgan’s Last Love is a gently enjoyable and rather sedate tale of growing old and the notion of family. It also confirms what some may suspect – that meeting a smiling Clémence Poésy on a Paris bus would make any person fall in love again.