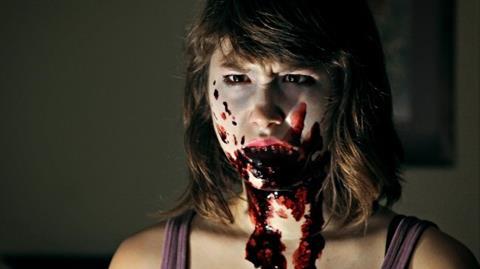 The third (!) feature film from Austin-based Emily Hagins, a high school student at the time of production. At the age of twelve, Hagins was the subject of Zombie Girl!: The Movie, a documentary about the making of her first feature, Pathogen. Having tackled a ghost story in The Retelling, she now turns her attention to the current hot topic of teenage vampire romance and delivers a film which will likely appeal equally to Twilight fans with a sense of humour and Twilight anti-fans who prefer more vicious vampires. It’s also a sweet-natured, well-observed movie about the sci-fi scene, offering a flipside to laddish pictures like Fanboys as it shows geek culture from a refreshing female perspective.

At 18, Hagins already has a better grasp of story structure, pacing and the mix between humour and pathos that makes for potent comedy-horror than some filmmakers twice her age.

Seeking information on possible cures for the curse, which seems to follow Lost Boys rules, the pair go to SpaceCon, a local science fiction convention, where being dressed up as vampires in a year when the undead are in as fantasy figures won’t look out of place. While Vince takes advantage of fangirls wearing ‘my bofriend sparkles’ t-shirts and Cindy begins to embrace the night, Paul bumps into Kate (Elaine Hurt), a shy girl who already has a crush on him, and they have the eponymous sucky teen romance.

At 18, Hagins already has a better grasp of story structure, pacing and the mix between humour and pathos that makes for potent comedy-horror than some filmmakers twice her age. If the informed geek patter evokes Kevin Smith or Quentin Tarantino, this lacks the aggressive, immature edge - despite net guru Harry Knowles’ cameo as a smug vampire expert who points out that being undead means having no blood pressure which means being unable to deliver on any romantic promise - of their films. It even manages genuine emotional charge in its liebestod-at-sunrise finale, which lends a depth to the title and doesn’t take the easy way out of the plot cleft-stick used in The Lost Boys, Twilight and other teen vampire pictures.

Hagins’ youth is obviously exploitable in publicity terms, but the film has winning qualities which would be impressive in any low-budget movie.The film first screened at SXSW and was also shown at the UK’s Fright Fest event.