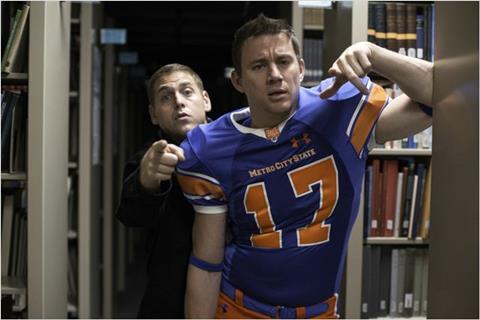 With the World Cup in full swing and the overall top 15 grosses less than half of the same period last year, 22 Jump Street held well to retain top spot at the UK box office.

A likely target for 22 Jump Street is Bad Neighbours which currently stands at $27m (£15.9m) and is the year’s strongest comedy to date. First, it will hope to become the fourth film this year to go three consecutive weeks as the UK’s number one.

Having flown into IMAX cinemas on Friday [June 13], Maleficent continued its excellent run with a $2.6m (£1.5m) third weekend.

Disney’s reimagining of Sleeping Beauty has now conjured up $23.1m (£13.6m) in the UK and shows little sign of slowing down. It has every chance of hitting £20m if it continues to hold well.

Also for Fox, Father’s Day previews of How to Train Your Dragon 2 resulted in an $881,000 (£518,729) haul. Currently, the animated sequel will be officially reported from its Scotland and Ireland opening on June 27, with its England and Wales previews added to its nationwide opening weekend on July 11.

It’s unlikely to hit the $23.1m (£13.59m) heights of Mr. & Mrs. Smith, but the action sci-fi could still challenge director Doug Liman’s last venture into the genre, Jumper’s $14.6m (£8.6m), given a lack of direct competition opening during the next few weeks.

Undoubtedly affected by the World Cup (and specifically the England game on Saturday night), Oculus scared up $701,000 (£413,000) from its 378 sites. Warner Bros will be hoping it can serve as a genre alternative in the coming weeks to sustain a solid UK run.

T.S. Spivet started its UK run with $76,000 (£44,777) from its 53 sites through eOne and, like Belle, will look to capitalise midweek. In terms of this weekend, it recovered from a soft Friday to post solid numbers on Saturday and Sunday.

This week sees saturation releases for Fox’s The Fault in Our Stars (opens June 19), eOne’s 3 Days to Kill and Warner Bros’ Jersey Boys.

StudioCanal’s Chinese Puzzle receives a wide release and Arrow’s Arthur and Mike opens in Ireland, while Metrodome’s Miss Violence and Sony’s The Art of the Steal are among the films receiving a limited release.