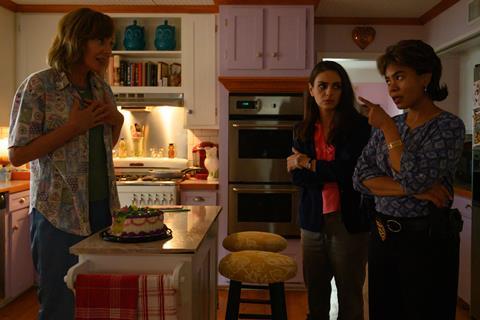 AGC is fully financing and has released the first image from the set (pictured). Tate Taylor directs from a Black List script by Amanda Idoko, and produces with kake Gyllenhaal and Riva Marker through Nine Stories, Franklin Leonard’s The Black List, and John Norris.

Janney plays Sue, an overlooked pencil-pusher who catches her husband in bed with another woman, causing him to die of a heart attack. Sue buries her husband and takes advantage of the growing celebrity status that comes from having a missing husband.

However things spiral out of control when Sue finds herself in over her head dodging the police and criminals, while trying to keep the truth from her half-sister and aggressive local news anchor Nancy (Kunis), and relentless Detective Harris (Hall).