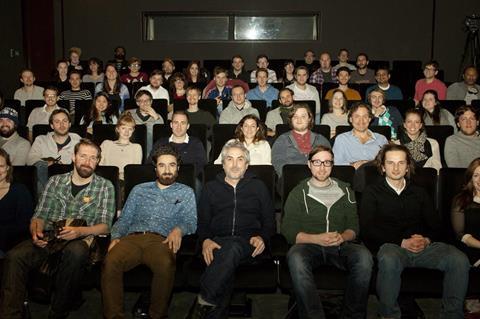 Speaking at Warner Bros’ HQ in London, Cuar‪ón said that he and his son Jonás had wanted to tell a story about triumph over adversity and set it in space because of the opportunities to use visual metaphors.

“The idea for the film had started with a visual image of astronauts floating in space,” he explained.

“But I was also inspired by my grandmother who bought a TV just so we could watch Neil Armstrong land on the moon. I watched it live! I’ve always been fascinated by that.”

Speaking of the journey of Sandra Bullock’s character – an astronaut caught up in a disaster 350 miles about the Earth – Cuaron said: “Adversity is cyclical. We are victims of our own inertia; we tend to go back to again and again. How do you break that cycle? That interests me.”

When asked how long it took to write a screenplay, Cuar‪ón replied: “My experience of screenplay writing is that it can either take you three-to-five years….or one month. I chose the one month route.

“If I’m not clear about the story then I just put it in a drawer until one day it makes sense and I can suddenly write.”

Speaking at the NFTS in conversation with commercials director Dougal Wilson, Cuar‪ón said choosing to focus on one person’s emotional and metaphorical journey had been inspired by two films: Steven Spielberg’s Duel and Robert Bresson’s jailbreak film A Man Escaped.

“Both of these films are about one person’s journey,” said Cuar‪ón. “When you are confronted by adversity it takes you out of your comfort zone and you lose ground and start to drift into a void.

“You become isolated in your own bubble, cut off from others. I sometimes feel like that. I wanted to realise that metaphor in Gravity.”

Created through a painstaking combination of physical and digital performance that disintegrates the divide between live action and animation, Gravity has been applauded for presenting the future face of 3D cinema.

But Cuar‪ón admits the production hadn’t always gone to plan: “When I finished the screenplay, I sent a copy to the DoP to ask if he wanted to do this small thing with me. I thought it would take maybe a year.

“At that time I was just a conventional writer and imagined we could film it using conventional rigs and stunts. I was committed to making it look photo realistic rather than fantasy or cartoon like. Just three hours into testing the rig I realised that I’d been a bit naïve.”

More than four years later and following various technical evolutions and a Eureka moment while watching an LED light show at a Peter Gabriel concert, a 12 wire rig was developed, operated by puppeteers from War Horse, set inside a cube called a ‘Light Box’ conceived by director of photography Emmanuel Lubezki and visual effects supervisor Tim Webber to recreate the image of natural light and zero gravity.

Resembling a hollow cube, its interior walls were made up of large, flat panels, each fitted with thousands of tiny LED lights.  As its name suggests, the purpose of the Light Box was to cast the appropriate illumination on the character, even when spinning uncontrollably through space. What is revolutionary is that instead of spinning the actor within the scene, they spin the walls of the cube.

“There’s a point in the film when Sandra Bullock is spinning around in space and you see the Earth, stars, everything spinning in the reflection in her eye. That’s because it really was spinning around her,” adds Cuar‪ón.

Asked when he first decided to make the film in 3D, Cuarón replied: “Four years ago when 3D was still cool.

“Actually, I had always been inspired by Lumiere who first experimented with 3D in 1898. He had always intended cinema to be in 3D but it was abandoned because it was too expensive.

“What I love about 3D is the sense of depth. The journey in film should be how you look with your two eyes.”

For many scenes, Bullock and co-star George Clooney were secured onto specialized rigs that could rotate or tilt them at different angles.

Cuarón and Lubezki were able to take advantage of more extreme angles with cameras mounted on giant computer-controlled robot arms, the type used in automobile manufacturing.

The actors took months to physically prepare for the film, especially Bullock whose performance Cuar‪ón compares to that of a ballet dancer.

“To create the appearance of zero gravity and to interact with virtual prop in a CG set, she had to choreograph each move so that each gesture of her hand and body was precise. She was amazing,” he said.

Filming involved hours of preparation to set up each shot. During this time, Bullock chose to stay in the rig. Asked how Cuar‪ón had managed keep the actors in their performance while surrounded by so much technology, he replied: “I gave Sandra some weird music that we’d been listening to while we were writing the screenplay. Then I’d discuss each scene with Sandra and she’d select a piece of that music and listen to this as an emotional reference for her performance.”

Despite the interest in the film’s technical achievements, Cuar‪ón insists that this is a human story: “Amidst all the tools and effects, we were always clear that Ryan’s struggle is a metaphor for anyone who has to overcome adversity in life and get to the other side.  It is a journey of rebirth.”

Gravity was written by Cuarón and his son Jonás Cuarón and has taken $632m worldwide to date.

The visual effects were handled by Oscar-nominated visual effects supervisor Tim Webber (The Dark Knight).  The music was composed by Steven Price (The World’s End).