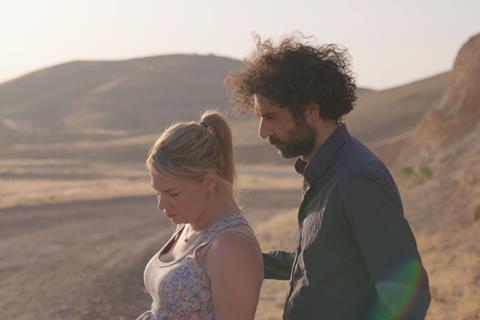 Nashif won best actor in Venice’s Horizons competition in 2018 for his performance in Sameh Zoabi’s Tel Aviv On Fire and is soon to be seen in Ben Sharrock’s Cannes 2020 selection Limbo. He originally broke out internationally in Hany Abu Assad’s 2005 Oscar-nominated drama Paradise Now.

In Abu Omar, he plays the father of a two-year-old child who dies in an Israeli hospital during a flare-up in the Middle East conflict that leads to official border crossings being closed.

Against the odds, he attempts to transport the body in a sports bag to Palestine for burial. Along the way, he is helped by a young woman (Shany Vershik), pregnant with an unwanted child.

“All the distributors of Tel Aviv On Fire and Paradise Now in which he starred are very interested in the film,” said Alpha Violet co-chief Virginie Devesa. ”It’s a drama but there is also a quiet, deadpan humour in the vein of the films of Elia Suleiman.”

Krispel’s previous features comprise documentaries Football In The Valley and Broken Hearts Club, about Ethiopian children being treated in an Israeli hospital for heart defects, which served as inspiration for the fiction feature.

Other buzzy new titles on Alpha Violet’s slate include Greek director Christos Nikou’s Apples, which is expected to premiere at autumn festivals, and Turkish director Baris Sarhan’s stylish thriller The Cemil Show, about a failed actor who incarnates a fictitious evil character he auditioned for but failed to get the part.