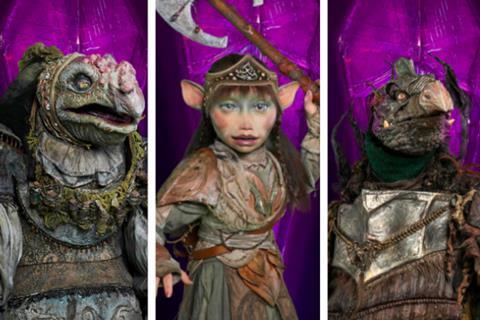 The Dark Crystal: Age Of Resistance characters The Collector, Maudra Feng, The General

The series of ten one-hour episodes uses classic puppetry and visual effects and is based on Jim Henson’s 1982 feature The Dark Crystal. The story takes place many years before the events of the film when the world of Thra is dying. Three Gelfling discover the horrifying secret behind the power of the Skeksis, whose evil has corrupted the Crystal of Truth.

Headey will portray Maudra Fara (pictured centre), Wong is The General (pictured at right), and Awkwafina plays The Collector (pictured at left). Weaver will voice The Myth-Speaker, and has no image in the series. John-Kamen is Naia, and Goelz plays Baffi.

The series is scheduled to drop on August 30. Ritamarie Peruggi is producing, and Lisa Henson, Louis Leterrier, and Halle Stanford serve as executive producers.

“I am so grateful to this dedicated and gifted ensemble who has so beautifully voiced the characters performed by our puppeteers,” said Leterrier, director and executive producer on the series. “Gathering such highly skilled performers was only possible because of their love and respect for Jim Henson’s work and his ongoing legacy.