Foam At The Mouth, The Line [pictured] among winners at market event which awards post-production services to up-and-coming projects. 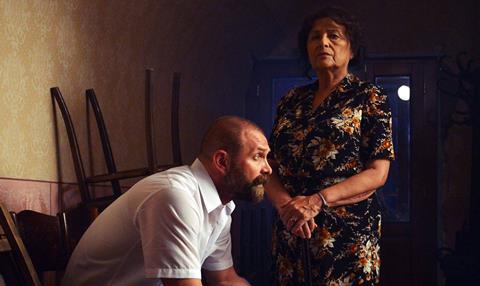 The Industry@Tallin & Baltic Event has announced the winners of its Works in Progress selections.

The Baltic Event Works In Progress award was presented to Foam At The Mouth, directed by Janis Nords and produced by Alise Gelze and Aija Berzina. A Latvia-Lithuania-Poland co-production, the psychological drama focuses on a former policeman who, after losing a leg, begins to train his three beloved police dogs while his marriage collapses.

“Our curiosity was piqued by the scenes we were shown from this film, both in terms of potential narrative progression and stylistic execution,” said the jury, which was made up of Thomas Weymar, managing director of Telepool, Mads Peter Ole Olsen, CEO of Red Herring Film, Nicholas Kaiser, sales & acquisition executive at Memento Films International and Screen editor Matt Mueller.

The award provides €3,000 to the film with the boldest artistic vision to aid with promotion and distribution in the Baltic states.

Director Peter Bebjak’s The Line [pictured], a Slovakia-Ukraine co-production, was awarded the Obrital Vox Studios’ post-production award for the international works in progress, given to the project which displayed the most creative and commercial potential. Produced by Wanda Adamir Hrycova and Andrey Yermark, the crime thriller, which takes place in the borderlands between Slovakia and Ukraine, earned €5,000 worth of post-production services.

The jury commented: “The director looked to have a very strong command of all the different elements, from narrative to character to tension to production values. It was the project that stood out to us as the strongest mix between commercial and creative.”

The jury also highly commended writer-director Andrea Magnani’s comedy Easy, about a former golden boy of car racing transporting a coffin from Italy to Ukraine. The film is a Ukraine-Italy co-production.

Also part of the international selection, The Ballroom, focusing on a retired footballer who enters a dance tournament for the elderly with his male ballroom instructor, took home one of the two music awards. The dramedy is directed by Ivan Porras Melendez and produced by Karolina Hernandez Chaves and Marcela Esquivel Jimenez.

“This project about ‘70-year-old teenagers’ – as the director described it – looks to be full of charm and entertainment value, and the choice of music and how it is used in the film is going to have a significant part to play in its success,” said the jury.

The Costa Rica-Mexico co-production shares the music award with Estonian production The Man Who Looks Like Me, directed by Andres and Katrin Maimik and produced by Maie Rosmann-Lill. The comedy centres on a middle-aged music critic who falls in love with the same woman as his ageing and spiteful father.

The jury noted: “This film shows real comic potential. We were immediately engaged by the characters and given the important role music can play in comedies, we would like to support the film with the music prize.”

Both films were awarded €1,500 worth of licenses for music represented by Apollo Music, to be used in the film or toward other promotional materials.