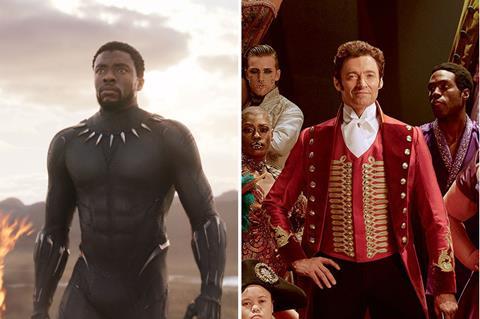 Black Panther recorded a fourth straight week top of the UK box office, posting a strong hold by falling a slim 22% to £2.94m this weekend.

Will The Greatest Showman ever leave UK cinemas? Following a remarkably prosperous opening ten weeks, the musical posted a huge 26% uptake this weekend with £1.56m.

Its total of £37.33m to-date is now only a few million shy of fellow Hugh Jackman-starring musical Les Miserables (£40.82m) and it looks set to surpass it in the coming weeks.

Red Sparrow fell a reasonable 31% in its second week, adding £1.17m. The Jennifer Lawrence-strarrer is now up to £4.02m.

Potentially tapping into the resurgence of musical popularity prompted by the remarkable success of The Greatest Showman, Universal re-released a sing-a-long version of Mamma Mia! into 446 sites this weekend, taking £172,928. The original release remains the 10th highest-grossing film of all time in the UK with the £68.61m it took in 2008. The sequel, Mamma Mia! Here We Go Again looks set to make a splash when its release on July 27, 2018.

In its second week, Sky Cinema’s first release under its new day-and-date strategy, Monster Family, added £103,110 from 132 sites in its second weekend, a slim fall of 18%.

Bombshell: The Hedy Lamarr Story posted a strong opening of £61,766 from 12 screens.

The Nicolas Cage and Selma Blair-starring Mom And Dad opened with £47,102 from 137 sites.