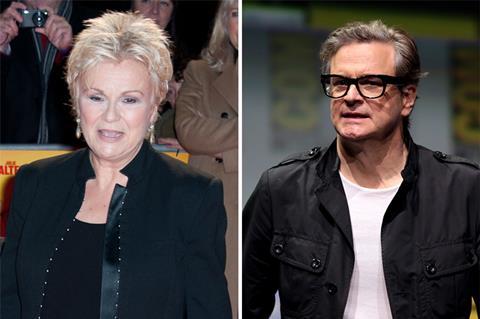 Marc Munden directed from an adapted screenplay by Jack Thorne based on Frances Hodgson Burnett’s 1911 novel. The action is transferred to the days of pre-Partition India in 1947, with Firth in the role of reclusive uncle Archibald, whose ten-year-old niece Mary is sent from India to live with him and his strict housekeeper (Walters) in the Yorkshire Moors.

Mary befriends her sickly cousin Colin, who has been shut away in a wing of the estate, and together they discover a hidden garden. Dixie Egerickx stars alongside Firth and Walters as Mary Lennox, and Edan Hayhurst plays Colin. The cast includes Isis Davis.

Heyday Film’s David Heyman and Rosie Alison serve as producers and Studiocanal CEO Didier Lupfer, Danny Perkins, and Dan MacRae are on board as executive producers. Jane Robertson is a co-producer.

Global Road initially picked up North American rights to the project during Cannes last year and has since ceased to operate.

“The original Secret Garden novel continues to be beloved by both children and adults around the world,” said STXfilms chairman Adam Fogelson. “We’re thrilled to partner with Studiocanal and Heyday, who together have worked on some of the most popular and well received family films of the last decade and look forward to bringing a fresh take on this fantastical story to life for audiences around North America.”

“We are delighted to have found the perfect home for the film with STXfilms, and we look forward to US audiences being able to enter the magical world of The Secret Garden,” said Lupfer.

STX’s Jordan Lichtman and Carolyn Steinmetz negotiated the deal on behalf of the studio with Anna Marsh, executive vice-president of international distribution and UK managing director at Studiocanal.

Studiocanal is developing and distributing high-end TV series through its network of European production companies including Tandem in Germany (Take Two) and the UK’s RED Production Company (Years and Years).

It is an associate of Danish-based SAM Productions founded by Søren Sveistrup and Adam Price (Ride Upon The Storm) as well as of UK-based Guilty Party Pictures; Benedict Cumberbatch’s production company Sunnymarch TV (Patrick Melrose); Urban Myth Films (War Of The Worlds) and Spain’s Bambú Producciones (Instinto). In 2018, Studiocanal launched a Studiocanal Original in France.