For the second week in a row three new films opened in the top three spots at the UK box office, with Universal’s Despicable Me finding more friends than Oscar-tipped The Social Network. 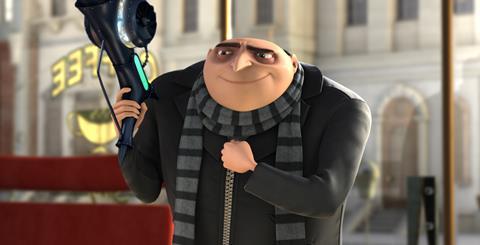 The opening take was the biggest since Toy Story debuted on a whopping $33.6m (£21.2m) in late July.

Sony’s drama The Social Network, about the founders of social-networking website Facebook, opened in second place, grossing $4m (£2.5m) from 394 screens for another strong screen average of $10,000 (£6,311). The Social Network is David Fincher’s biggest opener in the UK since his breakout hit Se7en, which debuted on $18.1m (£11.4) in January 1996. While Benjamin Button, Zodiac, Panic Room and Fight Club all garnered a degree of critical acclaim none managed more than $3.5m (£2.2m) on opening in the UK.

Thanks to The Other Guys, Eat Pray Love, Grown Ups and now The Social Network Sony has pulled ahead of eOne as the sixth-highest earner among UK distributors in 2010. Fox still leads the way with a 16.66% of the market share, but Disney follows closely behind with 16.50%, having released eight fewer films.

For the second consecutive week Paramount’s seventh-placed Made In Dagenham posted the smallest decrease in profit among top 20 films, posting a -32% week-on-week downturn for a total of $4.1m (£2.6m).

Despicable Me and Legends Of The Guardians are sure to profit from the upcoming half-term school break, action-adventure Red boasts a name cast and Paranormal Activity 2 will be hoping to emulate the success of the first Paranormal, which took $5.7m (£3.6m) with its debut in November 2009.