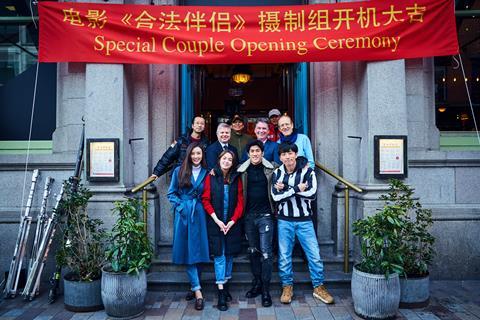 Special Couple, the first non-documentary feature to be produced under the UK-China co-production treaty, has wrapped principal photography in Belfast, Northern Ireland.

The film, a romantic comedy in both Mandarin and English, is co-produced by UK-based Zephyr Films and Chinese production companies Dimension Films and the Shanghai Media Group.

Starring Chinese actors Aarif Rahman and Bai-Ke and the UK’s Rupert Graves, Special Couple tells the story of two childhood friends from China who relocate to live in London. Following an unfortunate incident which results in one of them facing deportation, the pair pretend to be a couple to convince a sceptical immigration officer about their right to remain in the UK.

Principally shot in Belfast, the film is the first official UK-China co-pro to go into production since the treaty was ratified in 2014. The project had funding from the Northern Ireland Screen Fund, supported by Invest NI.

Chris Curling, producer at Zephyr Films, commented: “Now that we have shown that the treaty can be successfully used, I hope that it will pave the way for more and more Chinese and British companies working together.”

Noel Lavery, the newly-appointed permanent secretary of the Department for the Economy in Northern Ireland, added: “I am certain the recent UK/China Regional Leaders Summit, which focused on prosperity and partnership between Northern Ireland and China, will be cemented by this growing relationship.”

Special Couple is the third Northern Ireland-shot feature from Curling’s company Zephyr in the last two years, following Isabel Coixet’s The Bookshop and Marcus Rosenmuller’s Trautmann. The former will be released in the UK next month and the latter is scheduled for 2019.