As record-breaking Star Wars: The Force Awakens crossed $1.23bn worldwide the franchise’s creator has made clear his views on the tone of the reboot and selling the property to Disney. 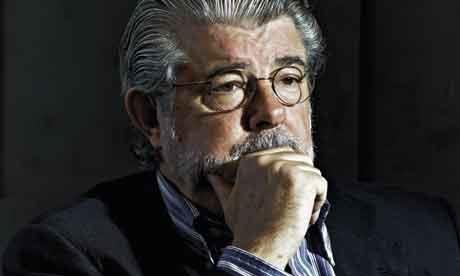 “These are my kids… all the Star Wars films,” Lucas told US TV interviewer Charlie Rose of the beloved series he launched in 1977. “I loved them, I created them, I am very intimately involved in them.”

When Rose interjected that Lucas sold the Star Wars franchise for $4bn [to Disney in 2012], the latter replied: “I sold them to the white slavers that take these things and…” before laughing and leaving the sentence unfinished.

Lucas explained how he had intended to write and direct another three films in the series but decided not to do so because he expected it would take another ten years to get it right and he had other things he wanted to accomplish.

“I’m 70. I don’t know whether I’ll be here when I’m 80 – every ten years the odds get less – and so I said I’m not ready to do that because I want to do these other things, so I have to make the decision on my own that it’s time to move on.

“So it wasn’t like they were taken away from me … and they felt they knew… they wanted to do a retro movie. I don’t like that. Every movie, I worked very hard to make them different. I made them completely different with different planets, with different spaceships, make it new.”

When asked if he was at peace with matters as they stood, Lucas replied: “Yeah. Yeah. No I said, ‘Look, I’m fine.’ You do end up with this thing which… you gotta live with it, people are gonna talk about it.

“It’s like talking about your divorce or something. It’s awkward but it’s not painful.”

After the Disney deal was finalised Lucas said studio executives were not interested in his vision for the next three films and he kept his distance from JJ Abrams’ production.

Elaborating on what he referred to earlier in the conversation as other things he wanted to accomplish, Lucas spoke of his desire to direct small, personal stories.

“These are little tiny movies that are experimental,” he said. “They aren’t using the same structure. I’m going back to where American Graffiti was or THX [1138], where I completely changed the way you tell a story using cinema.”

He added later: “I’m going to try to take it into something that is more emotionally powerful than most of the stuff we’ve done up to this point.”