Tenth anniversary of festival hits landmark for first time; Jonathan Glazer’s Under the Skin receives its Scottish premiere as the closing film. 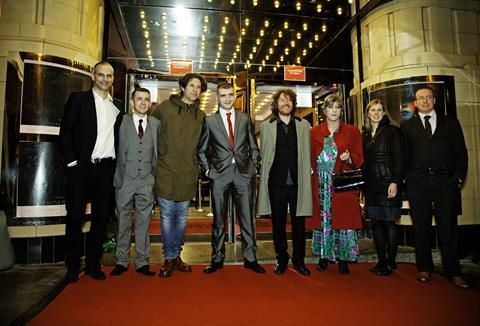 Closing with the Scottish premiere of Jonathan Glazer’s Under the Skin, Glasgow Film Festival has confirmed that its tenth edition saw it hit 40,000 admissions.

With final box office figures unavailable at the time of writing, the festival (which ran Feb 20-March 2) has hit the 40,000 mark for the first time with a programme of 369 screenings, panel discussions, live performances and pop-up cinema events.

Speaking at the closing gala, festival co-directors Allan Hunter and Allison Gardner thanked the festival’s sponsors - Glasgow City Marketing Bureau, Event Scotland, Creative Scotland and the BFI. Gardner added: “We’ve had a truly wonderful time with the festival: great films, fabulous guests and the warmest audiences. Thank you very much for the support and a huge thanks to the massive team that’s worked so hard across a huge range of venues.”

Introducing the film and the guests Glazer and producer James Wilson, Hunter said: “When Michel Faber’s novel was published, you thought if they’re ever going to make a movie of it, they’re going to need a visionary director and an amazing producer; people that are willing to take audacious risks with the material to make the film.”

With the film shot in Glasgow, Wilson related the film’s screening as a homecoming. “The film’s been shown at festivals but, in a way, this is special for both of us because we were here in 2011 making the film and or quite a long time. To be in the hometown of the film itself is a real honour. Jonathan set out to make a film that was intentionally mysterious, unconventional and strange, and we were incredibly supported throughout.”

Talking about the improvisational nature of the film, Glazer praised the actors who were cast before bring them on stage: “One of the important things about any film is to find the unity of all the ingredients. Casting people to have them try to match that lack of self awareness of people as we are when we’re not being watched is a tall order for any actor to match.”