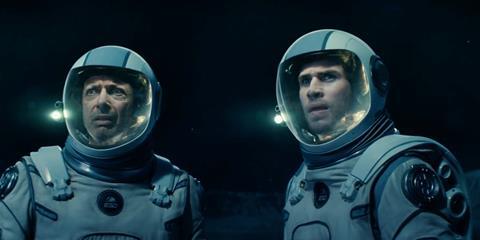 UPDATE: Independence Day: Resurgence continued to lead the international market with a $39.1m second weekend from its 67 markets for $175.9m to date.

It opened in Spain with $1.6m to chart second and enjoyed chart-topping bows of $1.1m in Sweden and $707k in Norway. The film still has four of the top ten international markets to release: Japan, Germany, France and Italy.

Among the highlights were Fox’s second biggest opening weekend of all time in Mexico with $8.4m and the biggest ever opening weekend in Uruguay with $621k, topping Fast & Furious 7.

Collision Course also opened top in Germany with $4.2m, despite the Euro 2016 football match on Saturday [July 2]. 75% of the international marketplace is still to release on the animated sequel.

Absolutely Fabulous: The Movie is off to an absolutely tremendous start in the UK with a stellar $5.9m to chart second behind The Secret Life Of Pets. The TV adaptation opens in the Netherlands on July 21 and Australia on Aug 4.

Finding Dory swam to an additional $34.4m from its 40 international territories for $166m so far.

Its leading overseas market is China with $36.2m to make it the biggest Pixar release ever in China, while the film dropped only 29% in Australia to hold the top spot for the third straight week and reach $22.6m.

Opening in Japan with a chart-topping $5.2m, Alice Through The Looking Glass sailed to an overall $5.4m from its 16 territories for $183.7m overseas and $259.3m worldwide.

The BFG landed in two international markets alongside its North American release, grossing an estimated $2m in Australia and $1.9m in Russia to chart third and second, respectively.

Teenage Mutant Ninja Turtles: Out Of The Shadows enjoyed a chart-topping debut in China on its way to a $30.5m weekend from its 58 markets for $109.2m to date.

Out Of The Shadows opens in Italy and the Middle East next weekend.

More than half of its overseas total so far comes from China where it is now Lionsgate’s highest grossing film ever with $81.9m. Summit Entertainment’s sequel opened with $663k and $393k in Colombia and Peru, respectively.

UPDATE: Swinging into 19 international markets to go with its North American release, The Legend Of Tarzan grossed $19.3m from around 6,900 screens.

Russia posted a chart-topping $3.1m and an estimated 44% share of the top five, while South Korea launched with $4m to chart second behind local opener Familyhood.

The reboot also opened top in the likes of India, Indonesia, Malaysia and Thailand, and from 122 IMAX screens overseas, the film grossed $1.2m.

The Legend Of Tarzan, produced by Warner with Village Roadshow Pictures, lands in the key markets of the UK, France, Australia and Mexico next weekend.

The Conjuring 2 has now surpassed Annabelle in total international box office as a $13.9m weekend from its 60 markets lifted it to $179.3m.

Holdover-wise, the adaptation rose 1% in Germany with a $2.3m second weekend for a local tally of $7m, while it posted a $2.1m third weekend in Brazil for $11.5m. It opens in Russia next weekend.

UPDATE: Central Intelligence shot into 15 territories this weekend for $14.2m from its 45 territories and $32.3m to date overseas.

New Line Cinema and Universal Pictures’ action-comedy charted at third in the UK with a $4m debut, opened second in Australia with $3.6m and fourth in Mexico with $1.6m.

It has 19 more territories to open, starting with Argentina, Latvia, Russia and Spain next weekend.

Opening in a further four markets, The Secret Life Of Pets hopped to $11.9m from its six markets for an early $30.9m through Monday [July 4].

Illumination Entertainment and Universal Pictures’ animation stands at number one in each of its markets to date, led by a terrific $6.3m second weekend in the UK for a local tally of $23.4m.

It opened number one in Taiwan with $2m and Hong Kong with $1.9m, while its $806k bow in Vietnam was the second-biggest opening for an animated film in the market.

The Secret Life Of Pets still has 60 more territories to release over the next three months, starting with India next weekend.

Legendary and Universal Pictures’ Warcraft marched to a further $6.2m from its 56 territories for $376.2m internationally, including China’s estimated total of $220.1m.

To go with its North American opening, Blumhouse Productions and Platinum Dunes’ The Purge: Election Year opened in Estonia, Lebanon, Slovenia and Turkey for an overall weekend of $119k.

Released in three territories, comedy No One’s Life Is Easy (So I Married An Anti-Fan) grossed an estimated $8.6m, according to ComScore.

Camping 3, the latest instalment in the hugely popular franchise, took the top spot in France ahead of The Conjuring 2 with an estimated $8.5m debut, according to ComScore.

In South Korea, Showbox’s Familyhood debuted top of the chart with an estimated $5.6m opening, while Lotte Entertainment’s The Hunt found $2.7m, according to ComScore.

The Angry Birds Movie flew to an extra estimated $1.3m from its 71 markets for $231.1m to date overseas.

Debuting top in Greece with $210k, Money Monster uncovered an estimated $875k from its 58 markets for $46.6m. It opens in Spain next weekend.