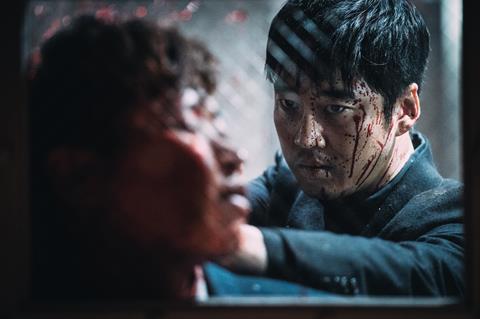 South Korea’s K-Movie Entertainment has announced pre-sales on fantasy action film Spiritwalker and changes to The Outlaws sequel, newly titled The Roundup, with the film’s star Ma Dong-seok (aka Don Lee) returned from shooting on Marvel’s The Eternals.

Directed by Yoon Jae-keun (Heartbeat), the film stars Yoon Kye-sang (The Outlaws), Lim Ji-yeon (Tazza: One-Eyed Jack) and Park Yong-woo (Unforgettable), the film is about a man who wakes up with no memory in a different body every 12 hours and has to make it back to his own.

From the producers of The Outlaws as well as The Gangster, The Cop, The Devil - BA Entertainment and Saram Entertainment – the film is in post-production.

Ma’s first Korean film after shooting The Eternals in Hollywood, crime action film The Roundup has a new production schedule and is set to start shooting in March with a new director.

Debut feature director Lee Sangyong, who previously worked as assistant director on The Outlaws as well as films such as A Single Rider and Long Live The King, has replaced Kang Yun-sung, who directed the original.

Ma continues to play the relentless police detective who swept his city clean of gangsters from Harbin in the original. This time, Son Suk-ku (Hit-And-Run Squad) will play the villain in what is understood to be a production with increased scale and overseas locations.

Budgeted at roughly $11m, the film is produced by Hong Film and BA Entertainment, which produced the original.

They are setting their sights on a Chuseok (harvest moon festival) holidays release in the autumn, looking to replicate the success of the original’s Chuseok release which clocked up more than $47m at the local box office in 2017. It also sold to multiple territories including Japan, Australia and New Zealand.