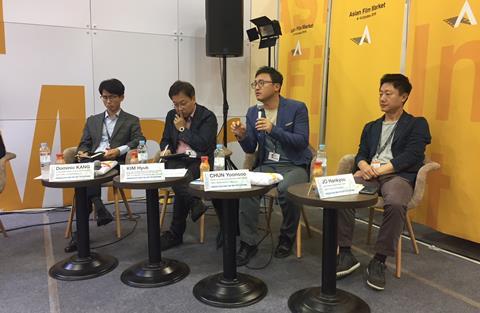 Korea’s film industry needs to harness big data and marketing strategies in order to compete with other forms of content on VOD platforms, said speakers at an Asian Film Market panel, “Korean Film Asks The Way To Platforms”.

Representatives of four Korean VOD platforms and four content producers described how the performance of local films on VOD is still dependent on whether they were successful at the box office.

“When you’re launching a film on VOD, the most effective marketing strategy is to release a film that had a good box office performance,” said Moon Youngwoo, director of Korean production outfit Ace Maker Movie Works.

Chun Yoonsoo, director of contents at Korea’s Home Choice platform, said: “It’s true that the more box office success a film has, the more VOD revenue it has.”

But he added that even box office hits are facing rising competition from TV dramas and other forms of content. “In 2015, 40% of Home Choice revenues came from movies, but this year that figure is down to 30%. VOD revenue has gone up but the ratio for movies has decreased.”

Jo Hankyoo, vice president of Kakao Page Corp, the VOD arm of leading Korean messaging app Kakao, said film producers need to understand changing consumption patterns among young audiences. “They’re using mobiles for Kakao talk, webtoons and YouTube – there are so many free alternatives that are going to win the time of your customers.”

He added that IPTV is a viable platform for long-form content, as viewers are more committed and willing to pay, but that movies are losing out to TV dramas on online TV platforms, particularly as SVOD (subscription video-on-demand) is the fastest-growing VOD segment in South Korea.

“You have to think about the format – Netflix prefers series because of the retention factor,” said Jo. “Films are very expensive to make and if you’re trying to retain viewers, series are a much more viable option.”

Several speakers suggested that VOD marketing campaigns could help movies become more competitive. “We need some VOD-specific marketing to compete with other content, but platforms have not been so active in this area,” said Home Choice’s Chun. “Recently the situation has started to get better, but we need to raise awareness of the need for VOD marketing.”

Meanwhile, the content producers on the panel urged the platforms to start sharing more data with them, so they can release and market their films more effectively.

“Content producers don’t have access to data, in the same way broadcast operators do, but IT systems including ‘big data’ and artificial intelligence have now become critical,” said CJ E&M head of contents business Cho Daehyun. “Sometime content producers have the data, but don’t have sophisticated technology to monetise it.”

“Netflix had a hit with House Of Cards using ‘big data’, but they’ve also used that same technology to make many shows that have failed,” Kang said.