The Lady In The Van first look

The first image from the Alan Bennett adaptation has been unveiled as well as the release date. 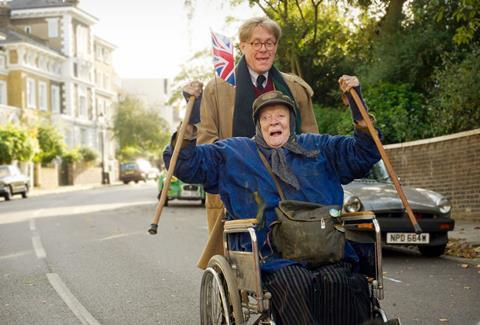 Sony Pictures has released the first official image from TriStar and BBC Films feature The Lady In The Van showing Dame Maggie Smith in character as the eccentric Miss Shepherd.

The film tells the true story of the relationship between Bennett and Miss Shepherd, a woman of uncertain origins who ‘temporarily’ parked her van in Bennett’s London driveway and proceeded to live there for 15 years.

Sony Pictures has also announced that the film will release in cinemas across the UK on Nov 13, 2015.

The movie is being filmed on the very street, and in the actual house, where Bennett lived in Camden Town. Bennett has also been present on set watching his life being re-enacted.

The film marks Hytner’s first directorial outing after ending his decade at the head of the British National Theatre. He and Bennett previously collaborated on the films of Bennett’s The Madness of King George and The History Boys.

Kevin Loader (Le Week-end, Venus, In The Loop) and Damian Jones (The Iron Lady, Belle) produce, along with Hytner.

Miles Ketley and Charles Moore are serving as executive producers, alongside Christine Langan of BBC Films.

Upcoming BBC Films releases include James Kent’s WW1 memoir Testament of Youth which will be released in January 2015; Richard Bracewell’s Bill for March; and Thomas Vinterberg’s Far From The Madding Crowd starring Carey Mulligan in Spring 2015.

The Lady in the Van joins a roster of other greenlit films at the newly revived TriStar that includes Ricki and the Flash, directed by Jonathan Demme, written by Diablo Cody, and starring Meryl Streep; Robert Zemeckis’ The Walk, based on Philippe Petit’s memoirs To Reach the Clouds, starring Joseph Gordon-Levitt; Jodie Foster’s Money Monster, starring George Clooney; and Ang Lee’s Billy Lynn’s Long Halftime Walk.