Copyright infringement and piracy protection was a point of focus at this year’s Les Arcs Film Festival. 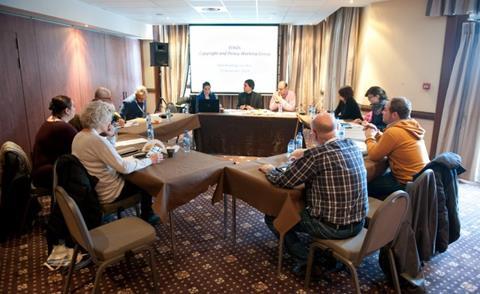 Centred around the legislative proposals due to the European Commission and European Parliament within the next six months, members of the film industry came together in Les Arcs (Dec 13-20) to discuss the options in moving forward as a united European front.

Les Arcs CEO Pierre Emmanuel Fleurantin reiterated that the panel is very important, and that “the goal is to create a common platform for the European film industry and the European Commission so that both parties can help (and not fight) the copyright issue.”

He further pointed out that those that were proposing the laws were not connected to the film industry so it was important to educate and make (cohesive) views known from the industry’s perspective.

Despringre highlighted that since 2001, there has been a European framework for copyrights issues within the EU. While she said that was a positive step, she also made the panel aware that, more recently, copyrights issues have not been as straight forward due to the emergence of the digital market.

For next year’s vote, she disclosed the EU Commission’s preference to place attention on the user, referencing issues such as cross-border access.  The idea has sparked debate amongst the industry, with some noting the idea as too radical of a change.

Scotta reinforced that value needs to be accredited towards film, “We must remind the EU Commission there is no starting point if film doesn’t start in the cinema. It’s important that distributors show films in local areas.  I don’t think digital does this enough; it has to start locally,” said Scotta.

Others in the audience addressed that changing paradigms is what created piracy. Seiffert responded practically: “It’s about how we put the content out there. I don’t notice VOD because it is not targeted towards me. If that is a launch pad for content, the whole thing needs to be more audience driven. And then the question is, who is going to pay for that?”

Watson reminded of another issue – non-EU gatekeepers. “Companies in the US are gaining power from this, and commissioners are looking at that.  There is now a dominance with these (digital) platforms, and that inadvertently affects the supplier side.”

He continued, “ What I think is missing is the user’s demand side versus the supply side (weakening the ability to fund future productions). Rather than VOD costs going down, they should instead go up.  Possibly the key thing is we don’t want to look as protectionalists so we have the opportunity to present to commissioners powerful but practical ideas that relate to the business side.”

Comments from audience members questioned the value of VOD platforms, and asked, “What is the chain value?”

Another topic raised revolved around movies as products, emphasising there are currently very little protective rights around VOD, and that the EU needed to be more involved in looking after European distributors. As NetFlix continues to buy regions, what are the rights for production companies and distributors?

While Despringre agreed many of these digital platforms are taking advantage of liability exemption, and escaping the value relating back to culture, she also reminded that all of these issues were important to raise to the EU in the upcoming months.

As concern was raised from filmmakers and distributors over the EU’s desire to eliminate geo-borders, helping to in turn create a more unified system for users, James Hickey, CEO of the Irish Film Board, agreed it was an issue that needed to be addressed, but also believed it was something that would be too complex for the EU to instigate now.

“If borders were to be excised, it would be very complicated to implement either a technology-based platform, or an overhaul with rights based agreements between distributors and VOD companies. And then you have to think, ‘What language would these films be in’? It really is more complicated than many think here in Europe,” said Hickey.

Despringre turned the focus to piracy, bringing up the debate on whether users should be criminalised, or whether the focus should instead be placed on the intermediaries who make the money?

“My understanding is that several states would like to connect the two issues.  Many stakeholders are trying to address the rights issues but I think fighting piracy should be part of this new commission proposal as well,” said Despringre.

Roziere added, “Targeting the end user is not the problem, it is who is providing.  We should be striking while it hurts (referring to the money). Parliament will be trying to pressure the commission on this.”

She continued, “Competition issues are big problems with internet platforms. If we make it so that content is hard to find, piracy will remain.”

Scotta added she had a hard time knowing if a streaming site was legal or not, and that if she couldn’t work it out, how would the European Commission and European Parliament be able to?

She furthered that a balance had to be made between access and protection. “Major search companies are not doing enough to get these films off search sites.  But I also understand penalising and theft is a tricky line,” said Scotta.

Scotta also referenced the UK Parliament that has a designated police unit serving piracy and rights issues. “It’s a start,” she said. “But more can be done.”

As the session came to a close, the panel urged all European film industry members to make their opinions known to the EU Commission within the next 4-6 months. “We need to be active!” reiterated Despringre.