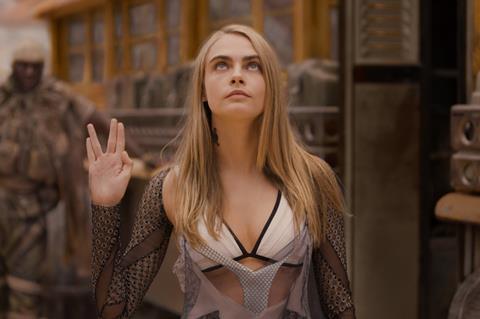 The company said that while losses had increased, the operating margin had improved and costs had been cut.

EuropaCorp is some six weeks into a six-month court protection order granted on May 13 to give the company time to restructure its debts.

It emerged at the end of May that the company was in talks with Pathé for the historic film group to take a majority stake. EuropaCorp confirmed that Pathé had expressed interest but emphasised that it was far from a done deal.

Revenue was generally down across the board due to decreased activity and the higher than normal results of 2017-18, related to the ongoing career of sci-fi feature Valerian And The City Of A Thousand Planets (pictured). It said revenues for the 2018-19 financial year were in line with financial years 2015-16 and 2016-17.

The one segment of the market that saw a rise in income for the company was that of TV series, where revenues rose by 8% to $30.9m (€24.4m), related mainly to the delivery of the final six episodes of the second season of the Taken.

Looking to the future, the company said its objectives for the ongoing 2019-20 financial year included continuing to reinforce its financial strength and restructure its debts.

It said it wanted to continue developing content in the vein of the films and series that had historically brought it success, especially action and sci-fi films involving Besson. It stressed these projects would only go ahead with controlled budgets and pre-financing in place.

Other goals included the development of series with strong international potential in the vein of the Taken spin-off.

The company noted that releases for the first half of 2019-20 comprised Guillaume Canet’s Little White Lies 2, which has grossed $48m worldwide to date, and Besson’s action thriller Anna, which launched in the US on June 21, where it grossed $3.6m in its opening weekend, and goes on release in France on July 10.

In terms of future projects, the company continues to develop a TV series adapted from the Jacque Tardi graphic novel The Extraordinary Adventures Of Adele Blanc Sec, which Besson previously brought to the big screen in 2010.

The results statement also revealed that the company is developing a TV series about history of jazz, on which Besson will be the showrunner.