Award-winning director’s Waiting For The Sea opened the Rome Film Festival in 2012. 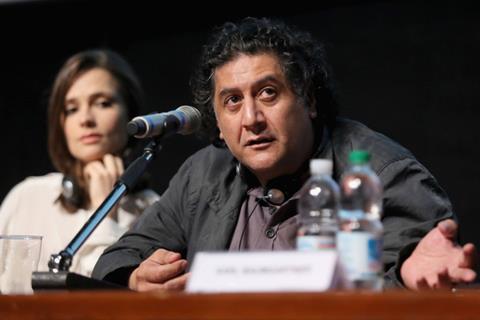 Tadzhik-born director Bakhtiar Khudojnazarov has died today in Berlin following a serious illness. He was 49.

After graduating from the directing department of Russia’s VGIK State Film School in Moscow in 1989, Khudoinazarov initially worked as an assistant director at the Tadzhikfilm studio and as a radio and TV correspondent.

His films were frequently in the lists of prize-winners at international film festivals, beginning with Brother which received the Grand Prix, FIPRESCI Prize and the Catholic Film Critics Award at the 1991 Mannheim-Heidelberg International Film Festival as well as the Audience Award at Nantes’ Festival des Trois Continents, and Turin International Festival of Young Cinema’s prize for the Best Feature Film, among others.

His next feature Kosh ba Kosh was awarded a Silver Lion at the 1993 Venice Film Festival and nominated in the Best Young Film category for the European Film Awards a year later.

The production of Luna Papa brought him together with the late German producer Karl “Baumi” Baumgartner of Pandora Film.

Baumgartner often recalled in interviews and on co-production panels some hair-raising adventures experienced by the cast and crew during the making of the film – being evacuated by the Red Cross from a region slipping into civil war and seeing the film’s set being destroyed by a raging storm.

This collaboration - which made Khudoinazarov’s name known within the international arthouse community – was then continued with the development of the project Living Fish (later known as Waiting For The Sea) which earned them both the Prince Claus Fund Film Grant at the Rotterdam International Film Festival in 2001.

Pandora was also a production partner for the 2003 film Chic – The Suit, winner of the First Prize at the Kinotavr - Open Russian Film Festival in Sochi that year.

The director’s last film, Waiting For The Sea, was produced by Baumgartner and Thanassis Karathanos’ Halle-based Pallas Film and released in German cinemas at the end of last November.

The last work by Khudoinazarov, who had been based in Berlin since 1992, was the TV series Major Sokolov’s Hetareas for Mars Entertainment, which was aired on Russian television last year.