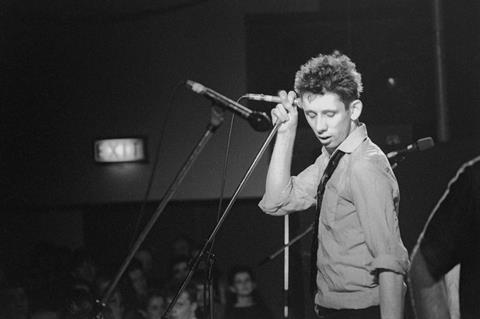 Shane MacGowan on stage in 1985

Crock Of Gold – A Few Rounds With Shane MacGowan is still in production and chronicles the life and music of the legendary singer-songwriter leading up to his 60th birthday celebration.

The film combines unseen archival footage from the Irish band and MacGowan’s family with  animation by Ralph Steadman.

Magnolia plans a release later in the year. HanWay Films handles worldwide sales on Crock Of Gold – A Few Rounds With Shane MacGowan, Altitude Films will distribute the film in the UK and Ireland, and BBC Four will broadcast the film.

Temple said, “Irascible, intractable, infuriating, fascinating, appalling, galling, bellicose, comatose, cantankerous, cadaverous, impossible, unstoppable – filming Shane is like flying through a radioactive rainbow but in the end there is an inner ‘Crock of Gold’ waiting to be discovered by those who try hard enough. Hence the title of the film, taken from the old Irish legend of the same name.”