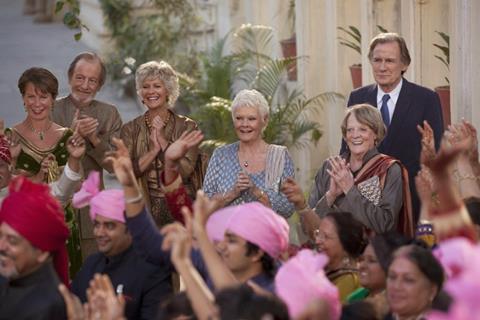 The grey pound has proved potent again at the UK box office as The Second Best Exotic Marigold Hotel opened at number one.

The debut is up on its predecessor’s $3.4m (£2.2m) debut from 504 sites before it went on to take $31.4m (£20.4m), a target that should be surpassed by the sequel especially as it’s likely to prosper midweek given its older-skewing audience.

It may have been prevented from a third straight week as the UK’s number one, but Fifty Shades of Grey had a different milestone to celebrate this weekend as it crossed the £30m mark after 17 days in play.

Critically acclaimed horror It Follows scared up a respectable non-final $570,000 (£370,442) from its 190 sites through Icon Film Distribution.

The debut is ahead of stablemate The Babadook which bowed with $534,000 (£347,512), albeit from fewer sites at 147. Like that film, It Follows will hope that its strong reviews and word-of-mouth will prevent it from the usual fast burn nature of horrors at the UK box office.

Peppa Pig: The Golden Boots ended its UK run after 16 days of release with a solid result of $3.5m (£2.3m) from reduced ticket price shows through eOne.

The screenings saw a live performance by the band at London’s Dominion Theatre broadcast live following the film.

Universal’s Kill the Messenger, Metrodome’s Hyena and Peccadillo Pictures’ Appropriate Behaviour are among the films receiving a limited release.