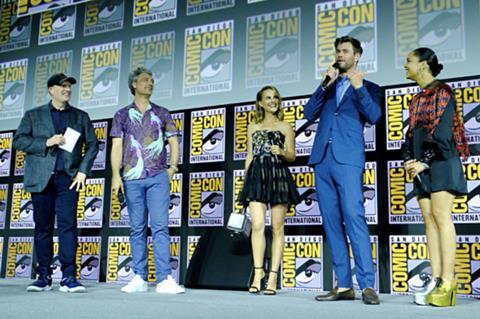 Marvel Studios chief Kevin Feige teased a glimpse into the company’s Phase Four, a roster that will bring The Eternals from Chloé Zhao, Shang-Chi And The Legend Of The Ten Rings, and Disney+ series including The Falcon And The Winter Soldier, and WandaVision, and will see Natalie Portman become female Thor.

Feige’s appearance delivered the usual Hall H highlight in San Diego on Saturday (20) as he outlined the next two years of the Marvel Cinematic Universe.

Black Widow currently in production starring Scarlett Johansson will be the first Phase Four film top open when it is set to debut on May 1, 2020. Director Cate Shortland appeared on stage with Johansson and introduced cast newcomers David Harbour as Alexei aka The Red Guardian, Florence Pugh as Yelena, O-T Fagbenle as Mason and Rachel Weisz as Melina.

Zhao took to the stage to talk up The Eternals and was joined by Bodyguard star Richard Madden as Ikaris, Kumail Nanjiani as Kingo, Lauren Ridloff as Makkari, Brian Tyree Henry as Phastos, Salma Hayek as Ajak, Lia McHugh as Sprite, Don Lee as Gilgamesh, and Angelina Jolie as Thena. The tentpole is being lined up for a November 6, 2020 release.

Sticking with the feature line-up, Shang-Chi And The Legend Of The Ten Rings will star Simu Liu in the title role of Shang-Chi, The Farewell and Crazy Rich Asians star Awkwafina in an undisclosed role, and Tony Leung as Mandarin. Destin Daniel Cretton, will direct the film, which is scheduled to open on February 12, 2021.

Doctor Strange In The Multiverse Of Madness is set for May 7, 2021, and reunites Benedict Cumberbatch with Doctor Strange director Scott Derrickson. Thor: Love And Thunder sees Chris Hemsworth and Tessa Thompson partner up again with Thor: Ragnarok director Taika Waititi and will see the return of Natalie Portman as Jane Foster (Thor, Thor: The Dark World), who becomes the female Thor. It is scheduled for November 5, 2021.

Feige announced Mahershala Ali as the new star of Blade, which has not been dated.

Elizabeth Olsen appeared on stage to promote the upcoming Disney+ series WandaVision (spring 2021); The other Disney+ titles in the pipeline are The Falcon And The Winter Soldier (autumn 2020) starring Anthony Mackie and Sebastian Stan alongside Daniel Brühl as the villain, Baron Zemo; and Tom Hiddleston starrer Loki (spring 2021).

The first Marvel Cinematic Universe animated series, What If…? (summer 2021), which will present alternate realities in the Marvel universe and will star, among others, Jeffrey Wright as the voice of The Watcher in the new series. Jeremy Renner in Hawkeye is set to debut on the platform in autumn 2021.