‘No Time To Die’ races to $22m at international box office 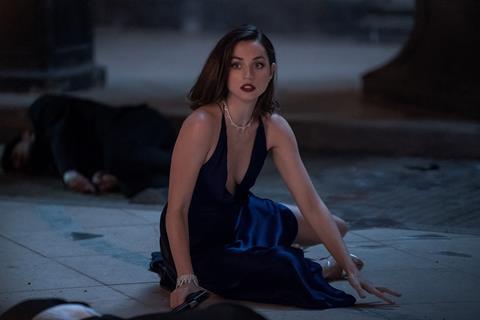 No Time To Die added $20m on Thursday (September 3) to reach an early $22m international running total of which $6.6m comes from the record $6.6m UK debut.

Germany delivered $2.8m on more than 1,300 screens on Thursday and took 84% of market share earning 10 times more than Dune in second place in the biggest opening day of the pandemic, more than doubling Fast 9, and the second biggest September opening day of all time behind local production Fack Ju Goehte 2.

Elsewhere Bond earned $681,000 in Netherlands on Thursday for 75% market share and the fifth biggest Thursday opening of all time, the biggest Universal and September debut and the biggest of the pandemic so far. Despite protocols excluding younger audiences the release outstripped Dune in second place by a factor of 10.

Switzerland delivered $615,000 on Thursday for record pandemic and September bows, while Mexico produced $588,000 from Wednesday and Thursday, and Italy delivered $573,000 for the biggest opening Thursday of the pandemic, and sixth biggest Thursday debut of the last decade. Universal reported “exceptional” performances in Matera where some scenes were shot.

The tentpole debuted in Austria on Thursday on $397,000 and 79% market share from 326 screens – the widest release in digital times – for the biggest Hollywood September opening day of all-time and the third biggest opening day since January 2019. The total market increased 192% on Thursday over last week.

The film has amassed $1.7m in Japan from Friday’s opening day for the biggest Friday launch in the Bond series and the second biggest Hollywood opening day of the pandemic. All major exhibitors are now operating at full capacity with no restrictions on showtimes.