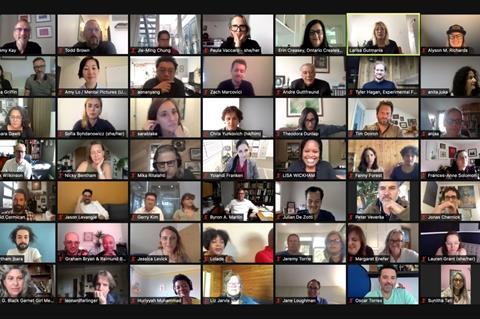 The virtual 2021 Ontario Creates International Financing Forum (iff) that took place this month brought together feature producers on projects at various stages of development with industry executives and hosted more than 550 meetings.

Iff, which took place from September 12-13 concurrent with Toronto International Film Festival, invited 42 industry executives from the likes of Netflix, Neon, Voltage Pictures, The Match Factory and Protagonist Pictures. Charlotte Mickie, vice-president of Celluloid Dreams, said: “IFF is awesome. The offering is diverse and rich, and the conversations with the producers are so stimulating and provocative, in a good way. I thought that the quality of selections this year was stellar, honestly – I met extraordinary people with exceptional track records.”

The panel discussed the intricacies of building co-productions and how to guide projects from development to release to best serve international audiences. The session also looked at the role played by streamers in expanding global interest in storytelling from outside the English-speaking world, and strategic approaches to hiring sales agents.

Two roundtables were presented on the future of financing from Ontario companies, BlockFilm and Mogul Productions. BlockFilm has a mandate to finance projects by new and under-represented voices on a range of social, political, environmental and human rights issues. Co-CEOs Pauline and Suzette Couture said the forum presented a “unique opportunity” to inform the industry of their company, while strategic advisor David Cormican of blockchain-based financier Mogul Productions noted “an incredibly high calibre of dynamic projects and teams taking part in this year’s iff “.

The Really Useless Orchestra producers Kate Swan, Margaret Enefer and Lindy Cameron of Move On Up/ Real Fiction Ltd. participated with the encouragement of Screen Scotland and found “positive and thoughtful feedback, opening up amazing opportunities for us with creative and business partnerships”. Ontario producers Sofia Bohdanowicz and Aonan Yang Maison du Bonheur Films attended with A Portrait and reported securing “important pieces” of the co-production jigsaw.

“Over the past 16 years, iff has become one of TIFF’s most anticipated industry events, and we’re thrilled that even a global pandemic hasn’t put a pause on the great energy of this event, from important and meaningful B2B meetings to buzzy producer meet-and-greets and roundtables over Zoom,” said Ontario Creates president and CEO Karen Thorne-Stone. “Along with our event sponsors Telefilm Canada and the UK Department for International Trade, we’re anticipating seeing many films go into production soon as a result of this year’s forum.”

Applications for 2022 iff will open in May.