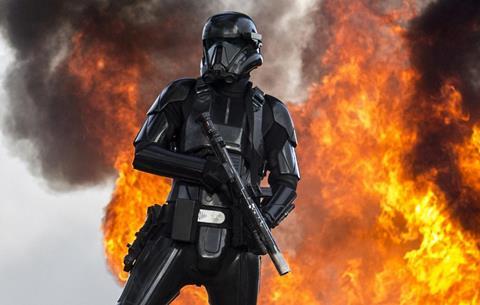 Rogue One: A Star Wars Story ensured Disney finished 2016 on a high as it neared the $800m mark at the global box office.

It opened in South Korea on December 28 for a promising $5.6m to date and has continued to be strong across Europe where it has amassed more than $200m, remaining the number one film in the likes of the UK, Denmark, Germany and Poland.

At 720 IMAX screens worldwide, the film added $12m (through Monday) as it approached $80m worldwide. From its 319 international IMAX screens, it took $5.5m over the four-day weekend for $30m.

Rogue One blasts off in its final international market of China next weekend.

The animation boosted 41% in Europe and will soon cross $100m in the region, where it retained the top spot in Italy and should become the second highest-grossing film of 2016 in France with $29.7m. It opens in Brazil, Chile and Panama next weekend.

Sing will cross the $100m mark at the international box office today (January 3) following an estimated $24.3m weekend from its 56 territories for $97.8m to date.

Sing makes it bow in Italy, Argentina, Paraguay, Uruguay, Poland and the Philippines next weekend.

Landing in Brazil with $104k from 63 sites, Nocturnal Animals earned $800k from its 36 territories for $13.3m to date, ahead of its release in France, French-Switzerland, Trinidad, Denmark and Greece next weekend.

Assassin’s Creed hunted down an estimated $22m from its 49 markets for an early $44.1m.

The video game adaptation landed top in the UAE and India with debuts of $1.4m and $1m, respectively, and charted second in Germany with a preview-boosted $5.3m. It fell only 21% in France with a $3.5m second weekend for $10.6m to date.

In the UK, it added $2.4m for $9.2m after two weeks in play and in Russia, it enjoyed a $2m second weekend for $8.2m to date. Passengers arrives next weekend in South Korea, Germany and Brazil.

Following its chart-topping debut, Resident Evil: The Final Chapter sliced to an extra $2.6m in Japan for $19m as of Monday. It expands overseas from the end of this month.

Universal and Legendary’s The Great Wall took a further estimated $21.6m from its eight territories for $151.6m to date.

Zhang Yimou’s epic action-fantasy added $15.4m in China where it is being distributed by Legendary East, and opened top in the likes of Malaysia ($1.3m), Singapore ($1.2m) and Taiwan ($1.4m).

It opens in 12 new territories next weekend.

The Will Smith drama also landed in Hong Kong with a preview-boosted $404k from its 36 sites and has releases to come in Italy next weekend, followed by Australia (January 12), Germany (January 19) and Brazil (January 26).

The awards contender has amassed $17.7m in South Korea after four weeks of release and has openings to come in Germany (January 12), the UK (January 13) and Brazil (January 19), among others, still to come.

Monster Trucks sped to $2.8m on its international bow in two markets, with the majority coming from a preview-boosted $2.2m debut in the UK. It opens in Russia, Mexico and Spain next weekend.