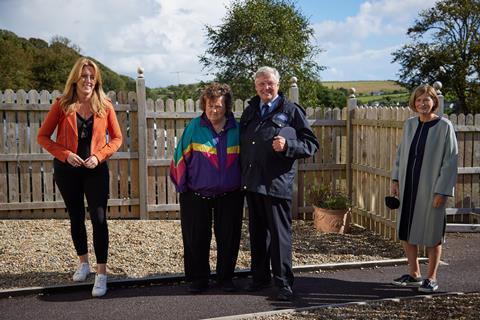 Screen Ireland is to invest €3m ($3.4m) in addressing growing demand for crew and talent access, with production in Ireland on course for a record year.

The investment is one of several announced as part of the body’s Building for a Creative Future 2024 strategy, aimed at driving further growth in the screen industry.

The strategy was launched on the set of Holding, a TV-series adaptation of Graham Norton’s novel, which has just completed filming in West Cork. Starring Conleth Hill, Brenda Fricker and Siobhán McSweeney, the four-part series for ITV and Virgin Media Television is directed by Kathy Burke.

€1m ($1.1m) is to be invested in three regional crew hubs across Ireland - in Limerick, Galway, and Wicklow - with the aim of building capacity for new and established crew. A further €1.75m ($2m) will be invested in two national talent academies focusing on film and TV drama and animation.

€500,000 ($577,383) is to be invested in Pathways, a diversity, equity, and inclusion fund aimed at creating paid work-experience opportunities on live-action production.

A further €250,000 ($288,691) will be invested in the Passport to Production Skills development programme which has already provided paid placements to 70 new entrants across a range of productions in 2021.

The Creative Futures Fund, established to develop expertise within existing screen companies, will make a total of €2.5m ($2.8m) available in loan-style funding.

Following the challenges created by cinema closures, release delays and reduced-capacity cinemas, loans of up to €200,000 ($230,953) will be available to Irish distribution companies to support structural marketing to promote Irish productions worldwide.

A new audience website called Where to Watch will also be launched in the coming weeks. This will allow audiences worldwide to identify where they can watch Irish screen content – whether that is at the cinema, or on an on-demand platform.

“This strategy sets out our ambition for a creative future as we emerge from the pandemic,” said Désirée Finnegan, CEO of Screen Ireland. “Reaching record levels of production activity in Ireland this year is a remarkable achievement and demonstrates the creative screen industry’s commitment, dedication, and resilience. To achieve sustainable growth, a supportive policy environment and targeted funding initiatives will be required.

“Continuing to invest in Irish creative talent and expanding the highly-skilled crew base through innovative skills development programmes will deliver a significant cultural benefit for Irish and international audiences.”