The world of Star Wars has been re-created for the latest immersive experience by Secret Cinema. Michael Rosser headed to a galaxy far, far away to find out if it would prove a trip into hyperspace… or hypersleep. 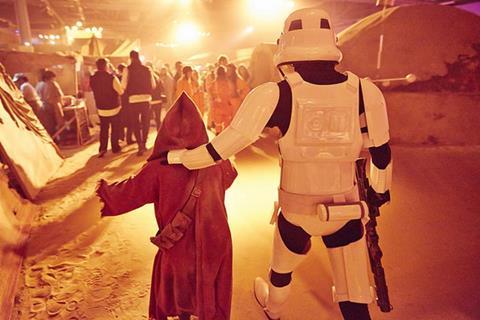 Secret Cinema has staged its biggest production to date – of that there is no doubt.

A team of more than 400 people at the immersive cinema specialist have recreated the fantasy world of Star Wars across 18 acres in London – twice the size of the space used to stage its hit production of Back To The Future last summer.

It reportedly took a year for founder Fabien Riggall to secure a license from Disney - owner of the Star Wars franchise - and its staging comes ahead of the much-anticipated release of new instalment The Force Awakens in December.

The ambition is bigger, the interactive elements more immersive and the sets enormous. But is bigger always better?

The answer is that this year’s Secret Cinema juggernaut – which will have run for 100 shows by the time its run is up on September 27 – is very different to last year’s offering.

While Secret Cinema’s Back To The Future celebrated the innocence of the 1950s, built around the brightly coloured town square of Hill Valley, its production of Star Wars is focussed on the oppression of the ‘Empire’.

This means having to hide your identity with scarves as you enter the world, eyed by suspicious stormtroopers who drag audience members away to detention cells. It means being smuggled between the various zones that make up the evening’s experience, herded by the hundred as you attempt to avoid detection.

It also means a greater sense of action and adventure as leaders of the rebellion sneak you into hidden areas to reveal closely guarded plans while shootouts take place across sets packed with details that even the most rudimentary Star Wars fan will find familiar.

The audience, which could total more than 100,000 by the end of the run, is encouraged to enter the spirit of things well ahead of the evening.

A dedicated ‘Rebel X’ website provides an identity that comes with its own costume and props. Screen was Remus Borabrex, mercenary, with a suggested costume that looked much like the garb of Star Wars hero Han Solo. A pop-up store in London has been set up where ticketholders are encouraged to buy clothes, props and even items to trade on the night.

There is also a ‘Secret Cantina’ bar in London, all designed to get ‘rebels’ in the spirit of things ahead of the main event.

While not totally necessary, it all helps build excitement. While shopping for the suggested red and black scarf at the pop-up, the woman behind the till informed us that the “intergalactic trade wars had meant the latest shipment had tragically not made it through the blockade – but there’s still purple ones”.

After being furnished with the secret location, Secret Cinema works to immerse the audience quickly upon arrival.

A few checkpoints must be crossed, each one taking the audience further from the real world and deeper into the world of Star Wars.

It is then possible to simply mill around and grab some food (“may the forks with you) with drinks served at an impressively decorated bar or find some key characters as scenes play out.

These can be hard to find in the purposefully labyrinthine set – unlike Back To The Future which played in the round – but fortune favours the brave and Screen was suddenly in the crossfire.

The second part of the evening opens up the experience further and feels suitably cinematic, although it wasn’t exactly clear where the audience should go or what they should do. Stormtroopers and villainous generals provided an answer to such confusion that encouraged the audience to move along.

After a suitably grand finale, the film kicks off and many of the audience would be forgiven for forgetting there was a screening at the end of all this.

While the pre-screening part of the evening feels shorter than last year, the action is far from over.

As the film plays out, Secret Cinema continues to deliver action and surprises that had the audience cheering throughout - although some simply chose to hang out in other parts of the location with a drink.

Much has been made of the £78 ticket price, which is high compared to a £15 cinema ticket but low when more suitably compared to a West End theatre ticket (tickets for tonight’s performance of Book Of Mormon could cost you £200+).

The show is also considerably longer than most stage productions with a larger cast of characters and more interaction.

That aside, while this year’s Secret Cinema should prove a thrill for Star Wars fans it may struggle to convert any newcomers.

But while it may not reach the highs of last year’s triumphant production of Back To The Future, Secret Cinema remain a force to be reckoned with.