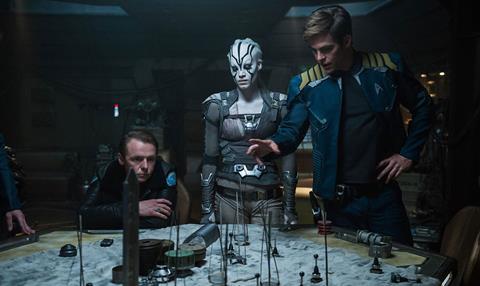 The majority of its weekend haul came from an $11.3m second session in China as it retained the top spot and reached $53.3m, while it added $1m in Brazil for a local tally of $3.6m and opened in Panama with a chart-topping $530k from 100 sites.

Its final release comes in Japan on Oct 21.

Paramount-MGM’s remake also opened in the UK with a five-day debut of $1.5m from its 510 sites and landed top spot in France with a $1.2m opening from 427 sites. It opens in South Korea next weekend.

UPDATE: Venice title The Age Of Shadows, selected as South Korea’s Oscar submission, stormed to a huge $16.1m bow from its 1,444 screens in South Korea.

Illumination Entertainment and Universal Pictures’ animation also opened in Malaysia with $646k, while it retained the top spot for the third straight week in Brazil with $2.3m for a local tally of $13.8m.

It has four more territories to release, starting with New Zealand next weekend.

Opening in eight new markets, Laika’s Kubo And The Two Strings grossed $2.3m from its 32 territories for an early $8.4m.

The UK was the top new opener with $1.1m from 515 sites, followed by Singapore’s $203k bow from 29 sites which marked Laika’s best-ever opening weekend in the market. It opens in Chile and Paraguay next weekend.

The Purge: Election Year and Central Intelligence stand at $31.3m and $87.8m, respectively.

Next weekend, Bridget Jones’s Baby is welcomed into 41 territories, including the UK, Australia, Mexico, Spain and Russia, day-and-date with its North American release.

UPDATE: Landing in Japan with $3.6m, Suicide Squad sliced to a further $10.5m from its 62 territories for $392.6m to date. The DC Entertainment adaptation’s leading overseas market remains the UK on $43.3m.

Sully posted a $10.5m international bow from its 39 markets, including the key markets of Australia and Russia.

Australia provided a preview-boosted $2.4m from its 363 screens to chart second and exceeding all Clint Eastwood films, apart from American Sniper, while it recorded Eastwood’s biggest opening weekend in Russia with $1m from 882 screens

It topped the chart in the UAE with $1m from 61 screens and from its 148 IMAX screens overseas, Sully grossed $1.1m for a global weekend of $5.1m which marks a new IMAX global record for a September 2D release.

The Shallows bit into an estimated $9.6m from its 56 territories for $55.1m to date, with the majority of its weekend coming from an $8.1m debut in China to chart second.

Creeping into 16 new markets, Don’t Breathe scared up $9m from its 30 markets for an early $20.3m, ahead of its release in Mexico next weekend.

The horror enjoyed excellent results across Latin America, including number one bows in Argentina ($465k) and Central America ($295k). The UK provided the biggest opening with $1.3m, followed by $1.2m debuts in Brazil and Germany.

Currently playing in 26 territories, Nine Lives pounced on an estimated $9m for $16m to date, according to ComScore. It opened in China this weekend.

The social media thriller posted a strong chart-topping $1.6m opening in Germany ahead of fellow new release Don’t Breathe, and also debuted with $168k in Austria to chart second. It opens in Russia next weekend.

Opening in Singapore ($130k) and Taiwan ($132k), Mike And Dave Need Wedding Dates partied to $1.8m from its 27 markets for $28m, with releases in the Philippines, Italy and Spain to come.

Independence Day: Resurgence landed in its final market of Italy with a $1.3m bow from its 569 screens. Overseas, the sequel now stands at $283.2m.

Morgan has grossed $2.4m from its 28 markets after two weekends in play, ahead of its release in Colombia, Singapore and Spain next weekend.

With no new openings, Finding Dory swum to an extra $3.3m from its 16 territories for $467m to date overseas and a worldwide haul of $950.6m. It opens in Italy next weekend.

Pete’s Dragon flew into the Philippines with a $400k debut on its way to a $2.2m weekend from its 29 territories for $32.2m. It lands in Australia and Mexico, among others, next weekend.

Train To Busan has now travelled to $97.2m overseas following an estimated $3.28m weekend from its seven territories, according to ComScore.