The home entertainment release sold more than 1.2m units in the UK in its first week of release (including both Blu-ray and DVD). 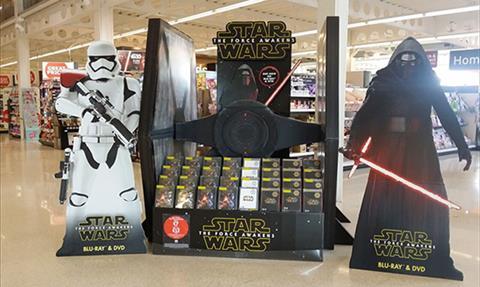 Star Wars: The Force Awakens has become the UK’s fastest-selling Blu-ray of all time, shifting more than 530,000 units in its first week of release (Apr 18-24).

The release bolstered the home entertainment market last week with sales up 51% year-on-year, according to the Official Charts Company. The company also noted that the sales of new release Blu-rays is up 17.1% year-on-year in 2016, in part aided by J.J Abrams’ sci-fi.

Liz Bales, chief executive of home entertainment trade body BASE, commented: “The huge leap in Blu-ray consumption shows that consumers absolutely value the content and are willing to pay a premium price for the best quality viewing experience at home.”

Last week, some shoppers who had bought the DVD took to Twitter to express dissatisfaction over the sparsity of extras such as deleted scenes and a code for the digital version, which is included in the Blu-ray release.