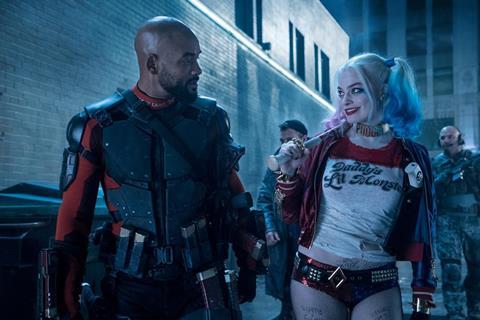 UPDATE: Suicide Squad retained its lead at the overseas box office with a $59m second weekend from its 62 territories for $243.4m to date.

The DC Entertainment adaptation opened in Argentina and Italy with chart-topping bows of $2.4m and $2.2m, respectively, while Brazil led the holdovers with $6.2m for $22.9m to date, already the second biggest Warner Bros title of all time.

Suicide Squad opens in Germany next weekend and Japan on Sept 10.

UPDATE: Aided by the success of titles such as The Secret Life Of Pets, Universal Pictures International crossed the $1bn mark this weekend for the tenth consecutive year.

Illumination Entertainment and Universal Pictures’ animation enjoyed a terrific chart-topping $9.6m debut in Japan from four days, and posted a $6.7m second weekend in China for a 13-day tally of $49.1m.

The Secret Life Of Pets opens in Russia, Portugal and the UAE, among others, next weekend.

Jason Bourne shot to an extra $18.4m from its 59 territories for $119.2m to date after opening in nine more markets.

France and Germany led the new openers with debuts of $3.3m and $2.8m, respectively, and holdover-wise, the UK remains the top market with a $1.9m third weekend for $22.9m so far.

Its next major release comes in China on Aug 23, followed by Mexico on Aug 26 and Russia and Italy on Sept 1.

Central Intelligence and The Purge: Election Year have now amassed $81.8m and $21.4m to date, respectively.

Holdover-wise, Le Vision Pictures’ Time Raiders added an estimated $12.3m for $121m from its one territory to date.

Another week, another big South Korean hit as Showbox’s The Tunnel opened with a chart-topping estimated $15.2m, according to ComScore.

With no new openings, Finding Dory swum to an additional estimated $8.1m from its 27 territories for $420.6m to date.

The Jungle Book swung into its final overseas market of Japan with an estimated $6.2m. Disney’s live-action adaptation has now amassed $584.8m overseas and $947.8m globally.

Its best opening came in Russia with $1.5m from four days to chart second, followed by Italy with $1.4m from five days and $1.1m in the UK. Pete’s Dragon lands in France and Spain, among others, next weekend.

Ghostbusters captured another $7.2m from 8,300 screens for $72.2m to date internationally.

Paul Feig’s reboot opened in Mexico ($2.5m to chart second), Spain ($840k to chart first) and France ($1.2m, including previews), ahead of its release in Japan next weekend.

The single-location thriller also posted chart-topping debuts in the Philippines and the UAE with $535k and $530k, respectively. It opens in France and Australia next weekend.

Sausage Party started its international rollout with $2.6m from its nine markets. The majority of the opening came from a $2m bow in Australia, and its next major market release is the UK on Sept 2.

The R-rated comedy also opened in the Netherlands with $625k and added $440k in France for $1.5m after two weeks in play.

X-Men: Apocalypse opened in its final international market of Japan with $3.1m from its 619 screens. The latest X-Men offering now stands at $384.3m overseas.

Mike And Dave Need Wedding Dates added $2.3m from its 26 markets, including a $1.4m opening in the UK, for $15.2m to date. It opens in the likes of France, Switzerland and Hong Kong next weekend.

Star Trek Beyond has now phased to $71.6m at the international box office following a $2.5m weekend from its 34 markets.

Ahead of its release next weekend in France, South Korea and Spain, the latest mission for the USS Enterprise crew has grossed $13.5m in Germany, $18.7m in the UK and $6.7m in Australia.

Teenage Mutant Ninja Turtles: Out Of The Shadows sliced to $1.7m from its ten markets for $157.2m, with its final release to come in Japan on Aug 26.