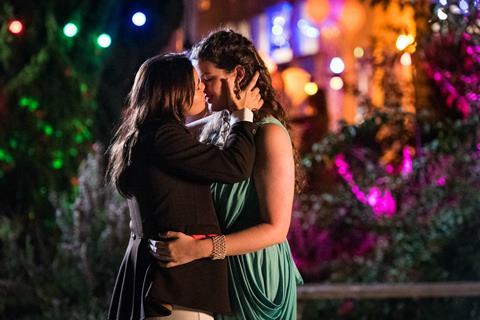 The selections will share a $30,000 pool, which Frameline increased from $25,000 this year to mark its 30th anniversary.

Monica Zanetti directed Ellie & Abbie (& Ellie’s Dead Aunt), about a teenage school captain who falls for a girl in her class and receives advice from her deceased lesbian aunt with words of wisdom from the 1980s.

The other grantees are Ahead Of The Curve, My Mom And My Little Secret, and Were You Gay In High School? The seven grantees were chosen from 173 submissions that included features and shorts in documentary, narrative, and episodic.

“This year’s grantees are a perfect mix of the challenges and joys LGBTQ+ people face today,” said Frameline director of programming Paul Struthers. “From transgender representation in film and TV in Disclosure: Trans Lives On Screen, to the struggles of immigrants in the United States today in La Leyenda Negra, to fun times in Australia’s first lesbian coming-of-age rom com in Ellie & Abbie (& Ellie’s Dead Aunt).”

“We are thrilled with this year’s outstanding slate of grantees, all of which will make their Bay Area premieres at Frameline,” said Frameline’s new executive director James Woolley. “To celebrate 30 years of the Completion Fund, we increased the fund from $25,000 to $30,000 to continue Frameline’s dedication to connecting filmmakers and audiences in San Francisco and across the globe.”