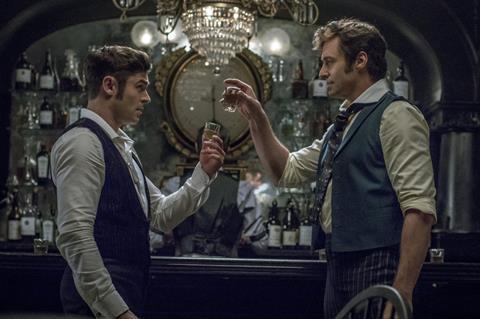 Following five weeks of impressively consistent returns, this weekend The Greatest Showman rose to top spot at the UK box office, recording a hugely impressive uptick of 6% with £2.18m.

The film has now crossed £20m and, after strong numbers all week, is up to £23.2m. It was still playing in 500 locations on Sunday and hasn’t shown any signs of slowing down yet.

Maze Runner: The Death Cure dropped to fifth place in its second weekend, falling 40% to £1.35m. The film’s cume is now £4.32m and the totals posted by the franchise’s previous two entries (both close to £9m) look challenging.

Coco recorded a slim drop of 29% this weekend. The Disney-Pixar animation added £1.65m, squeezing it just ahead of Universal’s Darkest Hour on the chart and taking it to £10.23m to-date. With school holidays set to come in the next two weeks, the film is likely to move closer towards the mark set by Brave (£22.16m).

Darkest Hour added £1.64m this weekend, a drop of 39%. The film is up to a strong £18.68m and further awards buzz should keep it ticking over in the next few weeks.

Early Man moved up to fourth position in its second weekend, posting a strong hold of £1.5m for a drop of just 26%. The film is up to £3.93m and, if boosted by half term holidays, will be looking to chase down the £13.76m posted by Shaun The Sheep Movie.

Despite garnering an Oscar nomination for leading man Denzel Washington, Roman J. Israel, Esq. flopped on its UK debut, taking just £22,000 from its 97 screens for an average of just £227. The film will need Washington to pull off an upset at the Oscars in March to garner it some more attention.

Call Me By Your Name also posted an uptick this weekend, rising 16%. It now sits on £1.5m.