'The Nun' holds off 'The Predator', 'Crazy Rich Asians' at UK box office 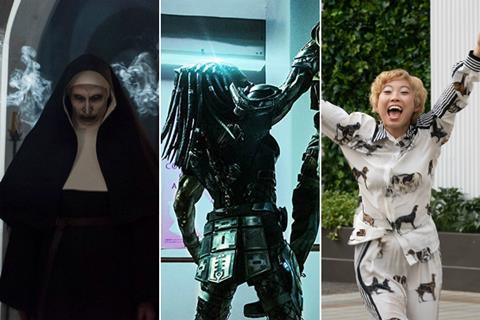 US horror The Nun retained its place at the top of the tree this weekend, adding a further £1.8m for a cume of £7.7m after two weeks. The film is a spin-off of The Conjuring franchise, the first entry in which topped out at £10.5m in the UK while its sequel made £11m (both also via Warner Bros). The Nun is well on its way to topping those totals.

The film narrowly beat new openers The Predator and Crazy Rich Asians - the latter kicked off with £1.6m from 532 sites, an average of £3,008. A romantic comedy featuring a host of well-known Asian, Asian American and Asian British actors, including Michelle Yeoh, Lisa Lu, Gemma Chan and Awkwafina, the film has been a smash in the US, taking more than $139m to date.

The UK opening is a little behind the pace of its US bow ($26m) when using the conventional method of taking 10% of a US opening weekend as a yardstick for its UK opening, without converting currency, but Warner will feel the film has good prospects to build on that figure after showing strong legs un the US.

King Of Thieves, James Marsh’s take on the true-life Hatton Garden burglary, opened to a respectable £1.5m from 494 sites. An average of £3,036. With previews, its running total is £1.54m.

The film tells the story of a group of elderly men who steal some £200m worth of valuables from an underground vault in London. Michael Caine, Michael Gambon, Tom Courtenay, Jim Broadbent and Ray Winstone star in the film which is produced by Working Title.

Previewing this weekend, Eli Roth’s family feature The House With A Clock In Its Walls grossed a non-final £1.1m ahead of its official release on Friday (Sept 21).

Chloe Zhao’s critical hit TheRider debuted in 44 sites with £23,633, and now stands on £36,254 including previews. The film tells the true story of a young cowboy in the US who suffers a near-fatal head injury, and stars the actual cowboy (playing a fictionalised version of himself) alongside members of his real family. It has ridden a wave of critical praise since its premiere in Cannes Directors’ Fortnight last year and Altitude will be hoping it has the legs to build on that initial opening.

Altitude is also teaming with Irish outfit Wildcard Distribution on the release of its Irish drama Black47. After a superb opening of £398,814 across Ireland and Northern Ireland, the film fell a slim –26% this weekend, adding £211,809 for £802,792 to date. Wildcard handles the Irish/Northern Irish release and Altitude will roll the film out in the UK on Sept 28.