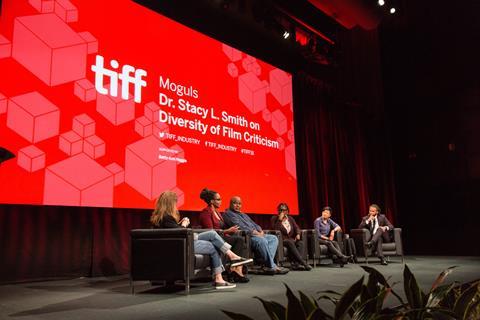 Examining reviews for the 300 top-grossing films aggregated on Rotten Tomatoes between 2015-2017, the ratio of reviews by top white male critics compared to those by top female critics was nearly 31 to 1, according to Smith and AII’s latest study.

Smith presented her research findings at TIFF’s panel on diversity in film criticism on Friday (Sept 7) at the CBC. She is best known for co-authoring the inclusion rider template.

Following Smith’s keynote, the panel discussed the need for an intersectional approach to film criticism. “There is diversity within diversity,” Coley commented. “Black is not monolith. Asian is not monolith.”

Smith introduced a database known as Critical as a tool to help studios and film critic associations better connect with journalists and critics from underrepresented groups. “The world in which we live in should match not only the stories that are being told but who is reviewing these stories,” she concluded.