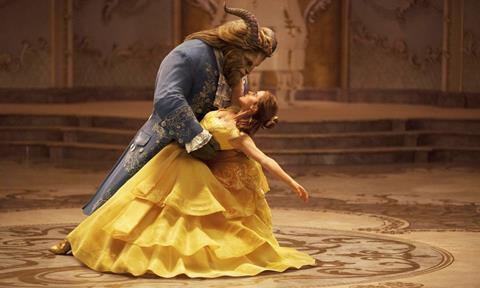 After securing the fifth-biggest opening-week ever with $34.6m (£27.5m), Beauty And The Beast kept waltzing as the UK’s number one film.

And it achieved that feat despite the sunshine.

Given how it’s gone so far, it’s going to take something special to top it.

The film’s achievements are even more remarkable given that there has yet to be a school holiday during its run. The upcoming Easter holidays will come in time to give it another boost.

Also for Disney, Moana has hit the £20m mark in its 17th week of release, a result that is more than nine times its opening take.

Battling the weather and Beauty And The Beast, Power Rangers charted second on its UK debut.

Get Out followed up its strong opening with a respectable drop of 37% on its way to a $1.72m (£1.36m) second weekend as it remained in third.

Universal’s critically acclaimed horror has amassed $6.1m (£4.86m) after ten days in play and will hope to continue to prosper as the sole major horror outing in the otherwise-crowded market at the moment.

Warner Bros’ King Kong reboot is now up to a solid $16.6m (£13.23m) and will still hope to hit £15m, despite Beauty And The Beast’s current domination of the UK box office.

Life charted outside of the top five with a disappointing UK debut.

Given the crowded market and usual fast-burn nature of genre films, Life could struggle to sustain from this weekend.

The Lost City Of Z was likely affected by the weather as it started its UK run.

Its strong reviews should boost its midweek audience and it will hope to post a sturdy hold this coming weekend.

Curzon Artificial Eye’s Graduation, Signature Entertainment’s The Void and Lionsgate’s The Autopsy Of Jane Doe are among the films receiving a limited release.