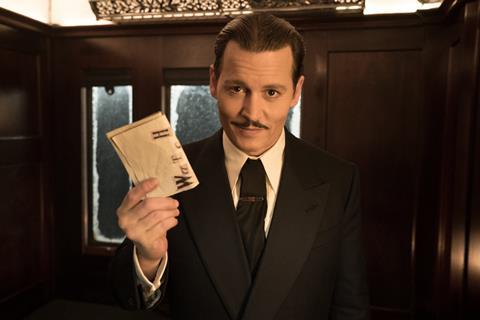 ‘Murder On The Orient Express’

Despite generally middling reviews, Murder On The Orient Express arrived top of the UK box office on debut.

Expect a long run for Murder On The Orient Express in the UK, given its crossover appeal and it will also pull in decent midweek returns, especially if it manages to capture the ‘Grey Pound’ audience that benefited the likes of The Best Exotic Marigold Hotel.

Thor: Ragnarok might have been dethroned, but can be happy with a respectable 36% drop (excluding previews) on its way to a $6m (£4.6m) second weekend.

A Bad Moms Christmas capitalised on the blockbuster-heavy market to chart in third on its UK bow.

Bad Moms went on to take $11.3m (£8.6m) in the UK and A Bad Moms Christmas will look to avoid the usual fast-burn nature of sequels to challenge that.

eOne’s critically acclaimed comedy is now to up a strong $4.7m (£3.6m) after 17 days in play, and is still delivering steady midweek business despite increased competition.

The Lobster went on to take $2m (£1.5m) in the UK after an excellent run, something The Killing Of A Sacred Deer will hope to replicate.

Also for Universal, Conor McGregor: Notorious had a one-day event release last Wednesday (November 1) and was on general release this weekend, taking an overall $331,000 (£252,279) so far.

The BFI’s re-release of The Silence Of The Lambs grossed $11,000 (£8,383) from its two sites (BFI Southbank and Eye Galway), including a sold-out screening that featured a Q&A with Jodie Foster on Friday (November 3) at the BFI Southbank.

This week sees saturation releases for Studiocanal’s Paddington 2 and Lionsgate’s Only The Brave.

Altitude’s The Florida Project and Sony’s Professor Marston And The Wonder Women both receive wide releases, while Lionsgate’s The Man With The Iron Heart and Park Circus’s Predator re-release are among the films receiving a limited release.