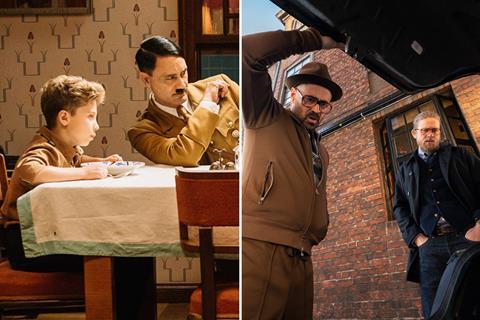 Taika Waititi’s Jojo Rabbit and Guy Ritchie’s The Gentlemen are among the new openers in what could be a low-key weekend at the UK box office. Both opened on New Year’s Day.

An awards contender after winning the prestigious audience award at Toronto, Jojo has two nominations ahead of this weekend’s Golden Globes - for best motion picture - musical or comedy and best actor – musical and comedy for Davis.

Guy Ritchie is making his return to the gangster genre with The Gentlemen starring Matthew McConaughey, Charlie Hunnam, Henry Golding and Hugh Grant, via Entertainment Film Distributors. It follows several big US studio projects for the director including last year’s Aladdin (opened £7.1m) and attempted franchise-starter King Arthur: Legend of the Sword (£1.9m).

Curzon is releasing Mikhaël Hers’ Amanda, about a young man must care for his niece after his sister is killed in a terrorist attack. The title debuted in the Orizzonti strand at Venice in 2018, and went on gross over $2m during nine weeks in its native France.

The new openers will face significant competition from a variety of holdovers this weekend. These include Star Wars: The Rise Of Skywalker, which has just passed £40m and is aiming for its third week atop the UK box office; Greta Gerwig’s Little Women, which made an impressive £3.6m debut last week; and family sequel Jumanji: The New Level, up to £21.9m on its fourth week.