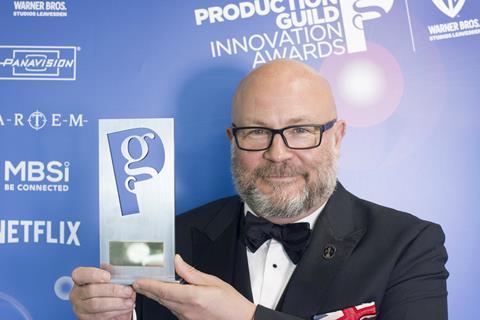 The UK production team on Jurassic World: Dominion and Gareth Ellis-Unwin, head of film and animation at ScreenSkills, are among the winners of the Production Guild of Great Britain’s 2020 Innovation Awards.

This is the inaugural edition of the awards; they were launched in September, designed to celebrate the achievements of PGGB members working in film and high-end television who have shown exceptional resilience and resourcefulness in the face of the Covid-19 pandemic.

The awards were presented via an online ceremony.

Ellis-Unwin won the production team award alongside line producer Georgette Turner and production coordinator Marco Calabrese, for ScreenSkills’ 360-degree video First Day On Set. Made with a 360-degree stereoscopic camera, the educational VR film showcases the variety of roles available on a film and TV set.

“We wanted to open up the hustle and bustle of a ‘real’ set to as many people as possible,” said Ellis-Unwin, who revealed that ScreenSkills is in development on its second educational VR film about the post-production world.

A special mention in the Production Team category went to season two of War Of The Worlds, produced by Urban Myth. It was the first high-end TV production to resume in the UK after the first lockdown, having spent 12 weeks putting plans in place. Filming wrapped in October, with the series expected to air in spring 2021.

Andy Hudson, film laboratory manager at Cinelab London, received the individual award. When all 28 employees had to work remotely when the first lockdown hit, Hudson ensured the laboratory could stay open, taking on all of the physical film lab and scanning work himself.

“It meant going back to my roots to get more involved in the processing side, working in the darkroom, chemical mixing, admin, despatching, anything to get the rushes through the Lab,” said Hudson.

Both McVay and Kousetta worked extensively with the UK government to enact the £500m film and TV production restart scheme; while McVay went on to chair the industry working group on insurance for the BFI’s Screen Sector Task Force.

The special contribution to the industry prize went to the UK production team on Universal’s Jurassic World: Dominion, the first major studio feature to get back underway after the government greenlit the production restart.

A crew including 27 PGGB members restarted filming on July 6 with a 1,000-strong workforce, with a second unit navigating travel restrictions to shoot in Malta. Forty thousand Covid-19 tests were carried out across the entire shoot; the blockbuster wrapped on November 7.

A special contribution special mention went to Emily Mortimer’s mini-series The Pursuit Of Love, starring Lily James and Emily Beecham and based on Nancy Mitford’s novel.

Produced by Open Book and Moonage Pictures for BBC One and Amazon Studios, the series restarted production on location in the Bristol and Bath area in July, wrapping in October.

An in memoriam section remembered the life of producer and longstanding PGGB member Willy Wands, who died in May aged 67.