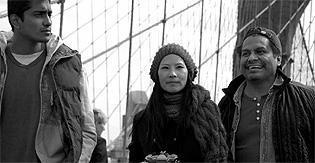 The 2004 film News From Afar put Ricardo Benet on the festival map and earned him top prize at the Mar del Plata Film Festival. Engaging in its graceful temporal shifts and unique portraits of both poor rural and urban landscapes in his native Mexico (he is an accomplished cinematographer), the unhurried pacing was no drawback. The connective tissue for the time differentials and the dual settings was a young man who left a drought-ridden pocket of poverty on account of problems with his stepfather, blame for his younger brother’s death, and the need to survive economically. He was not too successful in resolving any.

One longs for some of the nastiness Lucy Liu showed in the TV series Ally McBeal or Tarantino’s Kill Bill.

In Nomads, which just had its world premiere at the Morelia International Film Festival, he uses some of the same plot elements but set in Manhattan (with some almost gratuitous intercut scenes in the subways of Mexico City). After leaving his wife in his village in the south of Mexico and entering the States without papers, handsome young Roberto (Huerta) becomes a window washer at some frighteningly tall Manhattan buildings.

He gets involved in a highly unlikely relationship with Susan (Liu), a New York City native with a completely bourgeois lifestyle, whom he meets through the glass he polishes. Fortysomething Susan spends much of her off-time puttering in the large kitchen of her brownstone apartment; he eats white-bread sandwiches on the sidewalk and dines in the grubbiest of Chinese fast-food dives.

Except for some unusual set-ups taking in Manhattan architecture (even if many of the scenes are set in such typical sites as Central Park and the Flatiron Building), the film is dull from start to finish. The unlikeliness of the relationship is compounded by the nearly expressionless portrayals of both of the leads. One longs for some of the nastiness Lucy Liu showed in the TV series Ally McBeal or Tarantino’s Kill Bill. Few directors have been able to such New York’s enormous energy dry. The lethargy and overscriptedness will send this enterprise to an early festival and commercial grave. The Mexican audience was visibly unreceptive, so it will have minimal domestic exposure at best.

The naiveté is almost palpable. Susan is editing her documentary on suicides in the Mexico City subway system (interestingly, few are reported by wary authorities) in her New York office. The parental conflict that worked so well in News From Afar here feels gratuitous. Her unfaithful father had jumped in front of a train in the Mexican capitol. That her track record in the boyfriend department is poor tells us that she has never recovered from the shock. In voiceover and amazingly stilted dialogue, she spouts such silly truisms as “Is geography fate?” and, regarding a piece of metaphoric crystal, “Even if it falls, maybe it won’t break.” To compound the triteness, we hear more than once her favourite song, Joni Mitchell’s “Both Sides Now.”

The most interesting character (a few others, like Tomita as Susan’s expatriate sister feel casually tossed into the bizarre potpourri), is charismatic Romy (Gama), an older immigrant who is one of Roberto’s workmates. It’s too bad that this study in ennui has little of his life force. Benet understands the dynamics of Mexico but is way out of his element in the Big Apple.