Once Upon A Time In Vietnam 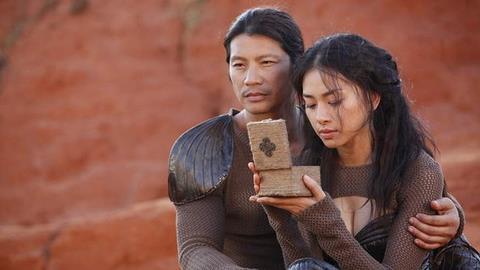 A rousing and romping martial arts genre adventure, Dustin Nguyen’s directorial debut Once Upon A Time In Vietnam is a real change of pace from the more recent diet of art house cinema from Vietnam, and as one of the country’s most expensive film to date it has moves as marketing links to break out on a modest scale. The film has opened in Vietnam and had its international premiere at the Busan International Film Festival.

Once Upon A Time In Vietnam takes a quirky spin by being set in an anachronistic world where Bao drives a roaring motorcycle.

The fact that Nguyen has a healthy US profile, thanks to his roles in the cult 1987 television series 21 Jump Street and 1994’s SeaQuest 2032, and also takes on the lead role in the film should aid international marketing, and while it offers little new in the martial arts stakes it is a shrewd blend of genre styles.

Nguyen stars as Master Bao, a warrior monk unable to return his monastery after a lifetime of killing after protecting his leaders and who roams the land tracking down deserters.

He arrives at a remote Sand Village where he rents a room from mild-mannered baker Hien (Thai Hoa Tran), who is being harassed to sell his shop by local thugs. It turns out that Bao has history with Hien’s wife Anh (a charismatic Thanh Van Ngo), who used to fight alongside him and had a relationship with him. The fact the he thinks her son Hung may be his child brings further intensity to their reunion.

The scene is set for both a showdown with the town thugs, who end up recruiting a rival master (Roger Yuan, who has had small parts in Skyfall and Bulletproof Monk), who also turns out to have history with Bao and Anh.

Given the title, the filmic links to American and spaghetti Westerns (a well as the likes of Japanese film such as Yojimbo) is clear – as are some of the music cues – though Once Upon A Time In Vietnam takes a quirky spin by being set in an anachronistic world where Bao drives a roaring motorcycle, and clunky old trucks drive into Sand Village alongside horses and wagons.

The film looks great, with top-notch production design and costumes (with lithe Thanh Van Ngo looking especially good in her snug leather gear), and the action scenes are slickly choreographed with Nguyen suitably smoldering as the longhaired enigmatic anti-hero.