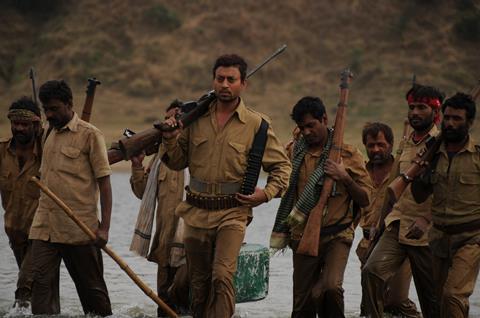 In a way, Tigmanshu Dhulia’s (Haasil, Charas), Paan Singh Tomar  reminds one of Shekhar Kapur’s celebrated 1994  Bandit Queen about the life of dacoit Phoolan Devi, who ultimately went on to be a member of India’s Parliament before being murdered outside her New Delhi home.

Credit must surely go to Khan who is restrained, yet engaging.

However, Tomar’s (played by Irrfan Khan) life as an outlaw followed his fame as a hotshot athlete in the Indian Army with an unbeaten 10-year record in steeplechase. Dhulia, who assisted Kapur for Bandit Queen, went back to the same location, the ravines near Agra, to shoot his film.

The work conveys in an almost agonising manner how an unjust system turns Tomar from a law-abiding, disciplined and highly patriotic soldier-athlete into a dacoit, though he and the members of his ilk prefer to call themselves rebels or “baaghis”.

In a telling scene, he almost throws out a bumbling, vernacular, journalist even before the interview begins because the man mistakenly describes Tomar as a dacoit. Sensitive to the core and honest to the point of being foolishly naive, Tomar resists taking up the gun to settle a land dispute with a relative.

But when the local administration, the police included, refuse to help him even when his farm is taken away, his crop set on fire and his old mother and young son are brutally beaten, Tomar’s patience snaps. And like the sport he excelled in, he must reach the finishing line.

Extremely well scripted by Dhulia and Chouhan, the movie steers clear of being too dramatic, a tendency that makers of such genre tend to slip into. A good part of this credit must surely go to Khan – seen recently in films such as Maqbool, The Namesake, and Slumdog Millionaire - who is restrained, yet engaging.