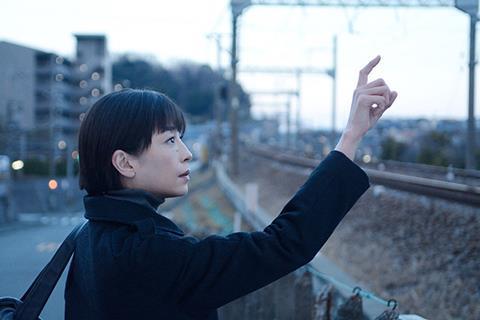 An absorbingly subversive Japanese film that delightfully blends drama with moments of almost mischievous fun, Yoshida Daihachi’s Pale Moon (Kami no Tsuki) is a real delight, given heart, compassion and a real sense of low-key rebellion thanks to Rie Miyazawa’s delightful lead performance as a mid-mannered bank worker and wife who turns to embezzling so she can keep her younger lover happy.

At the same time her schemes – which allow her to gain real independence (especially since handily her husband has been transferred to China) – give her a profound sense of liberation.

The film, which world premiered in competition at the Tokyo International Film Festival, pokes gentle fun at the notion of Japan’s ordered, obedient and mannered society, and while running perhaps a little too long its story never dawdles and heads towards a smart ending that leaves you sympathetic to this most gentle and warm-hearted swindler. With an almost permanently worried expression on her face, Miyazawa gives a memorable performance that should help see further attention to both her role and the film itself internationally. Likely to feature at other festivals, the film is set to be released in Japan in November.

It is the early 1990s, and Rika Umezawa (Miyazawa) has recently been promoted to a full time position, and cycles around to sell savings schemes to wealthy elderly clients. Though it is hinted at – but never emphasized – things are dull at home with her distant but genially ambitious husband, and when she meets Kota (Sosuke Ikematsu), the grandson of one of her clients, she is intrigued by his interest in her.

She lets him take her to a love hotel, and before long they are embroiled in a lusty and playful relationship. It turns out he has financial problems after borrowing money from a loan shark for pay for tuition. His rich grandfather won’t help, so she contrives to make out a fake cashier’s cheque and ‘loans’ Kota the money. And so begins an increasingly sophisticated series of scams that she sets in place, mainly to keep her young lover convinced that she is independently wealthy as she buys more and more lavish gifts for him.

But at the bank the ever-watchful supervisor Mrs Sumi (Satomi Kobayashi) has her suspicions, and once she starts investigating the true depth of Umezawa’s fraud is revealed, with the bank managers desperate to keep things under wraps. At the same time her schemes – which allow her to gain real independence (especially since handily her husband has been transferred to China) – give her a profound sense of liberation, and despite the fact that her young lover lets her down she comes to realise that she must strive for her own sense of freedom.

This is beautifully exemplified in a scene near the end where she sits in the bank’s austere office after the full gamut of her defrauding has been revealed and decides that ‘escape’ – and the liberation it brings – is her only answer.

The story is interspersed with flashbacks that grow more and more important, harking back to her time as a schoolgirl at a Catholic School where she took delight in giving money to needy children. She so wants to help that she takes money from her father’s wallet to give to charity, completely convinced – as she is in later life – that it is the right thing to do.

Screenplay: Kaeko Hayafune, based on the novel by Mitsuyo Kakuta