Stylish thriller from Mexico is a remake of a Colombian hit 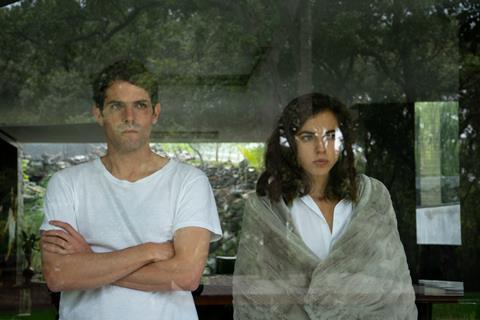 Mexican filmmaker Jorge Michel Grau’s remake of the 2011 Colombian thriller The Hidden Face introduces us to an unconventional romantic triangle — a symphony conductor, his new young lover, and a wife who has mysteriously gone missing — and then combines elements of the ghost story, romantic melodrama and whodunit. In its waltz between genres, Perdida may end up being a bit too preposterous for its own good, but after setting up the audience with a seemingly straightforward premise, it takes appealing narrative risks, playing with story structure and our sympathies simultaneously.

An air of unreality hangs heavy over Perdida, which, to be fair, is partly the point

Elegantly shot and aware of its debt to Hitchcock, Perdida is best appreciated as a glossy lark without much emotional heft beneath its trashy veneer. After opening in Mexico earlier this year, the film is next part of the Fantasia slate, although its genre trappings are more subdued than is typical of that festival. Grau is best known as the filmmaker behind 2010’s We Are What We Are, and audiences who like sexy, sinister page-turning thrillers such as Gone Girl and The Girl On The Train may savour this film’s pulpy approach.

Jose Maria de Tavira plays Eric, a conductor who learns that his wife Carolina (Paulina Davila) has left him. Distraught, he goes to a bar to drown his sorrows, only to hit it off with pretty waitress Fabiana (Cristina Rodlo), with whom he begins a torrid affair. Fabiana moves into his sleek modernist home but becomes worried when the police come calling: Carolina has gone missing, raising suspicion that perhaps Eric is behind her disappearance.

Perdida’s whirlwind romance has all the trappings of a too-good-to-be-true scenario, and sure enough Fabiana quickly begins to wonder if her older new beau — with his expensive taste and cultured lifestyle — may be hiding something. Whether lounging in the tub or brushing her teeth, she starts hearing strange sounds, leading her to believe that something paranormal may be going on.

But after Grau establishes that tense, eerie framework, he radically shifts gears, flashing back a year ago. We now meet Eric and Carolina at the height of their love when he convinced her to move from Colombia to Mexico so he could take a prestigious position at the Mexico City Philharmonic. If Perdida’s opening half hour starts to feel like a haunted-house tale, the next segment is more of a domestic drama that eventually clarifies what became of Carolina.

With its beautiful actors and gorgeous locales — cinematographer Santiago Sanchez S shoots the house interiors like he’s doing ads for Architectural Digest — Perdida boasts a high-class tone, luxuriating in each of the script’s convoluted twists and shocks. There’s an old-fashioned quality to this thriller — little blood, a smattering of sex, a Hitchcock-ian emphasis on delicately unfolding mysteries — as the director teases the viewer with possibilities about Carolina’s whereabouts, inviting us to guess before unleashing the big reveal.

However, the sumptuousness of Perdida’s look can’t fully overcome a slow pace and one-dimensional characters. De Tavira smartly hints at both Eric’s sorrow and potential malicious streak — he uses his handsomeness almost like a mask to conceal his true feelings — and Rodlo has fun playing an innocent who slowly realises she may be in danger. But these people, as well as Carolina, are thriller archetypes who rarely surprise us. The one meaningful exception involves a character who, late in the game, does something so vicious that it forces viewers to recalibrate their feelings about that person and exactly who the film’s true victim is.

Still, an air of unreality hangs heavy over Perdida, which, to be fair, is partly the point. Grau’s creamy ludicrousness pervades the film — a suspense sequence is brashly crosscut with a high-intensity symphony performance; secret corridors and unusual keys become important plot points. Yet Perdida doesn’t generate much emotion despite its overheated atmosphere. Grau and his cast attack the material with a chess-like precision that doesn’t leave room for feeling. As a result, Perdida ends up a bit bloodless in more than the obvious way.