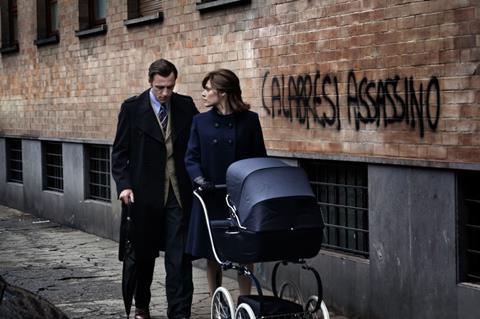 An impressively staged conspiracy period drama,that favours a procedural style rather thandramatic arcs, Piazza Fontana: The Italian Conspiracy (Romanzo di una strage) may be a little too one-tone and plodding as it weaves its way through acomplex, character-heavy, story to interesttheatrical distributors, though it has the style and grippingreal-life story to possibly appeal totelevision.

Valerio Mastandrea – usually decked out in a natty polo neck sweater under his suits – is a stylish presence and has the right sense of innate intelligence to carry the role.

The dramatic events surrounding a bomb explosion in Milan in December 1969 makes for an intriguingly complicated and politically nuanced (especially for Italians) story, and in the sure hands of director Marco Tullio Giordana the background to the incident and the many-strands of a possible (and likely) conspiracy maker for an enthralling if never overly tense or gripping story.

The film opened in Italy earlier this year, and screened in the main competition of the Karlovy Vary International Film Festival.

The bomb exploded at the piazza Fontana branch of the Banca Nazionale dell’Agricoltura in Milan on December 12, 1969, causing the death of 14 (though fatalities later rose to 17) and the wounding  of 88 people, with police investigations concentrating on it being planted by anarchists.

Police Commissioner Luigi Calabresi (Valerio Mastandrea) sets about rounding up known anarchists, including non-violent protester Giuseppe Pinelli (an impressive Pierfrancesco Favino) who Calabresi has developed a grudging respect for. With his superiors pressing to secure a connection to the anarchist group, Pinelli is detained beyond the legal time limit and deprived of food and sleep = then on the night of December 13 he plummets to his death from Calabresi’s office window.

Calabresi was not in the room, but due to clumsy attempts made by Police headquarters to justify the event he ends up being identified as the person directly responsible for the incident. Over coming months there are suggestions that the blast was actually a plot by neo-Nazi and fascist groups to try and implicate the anarchist movement, with Calabresi eventually being shown a weapons bump where bomb materials may have come from, but which had links to military and even NATO.

The lengthy film is punctuated by a series of chapter heads which seek to emphasise the police procedural tone of the film, and which would certainly also assist any television broadcast. The 1960s are recreated with a good deal of style – though cars are always pristine, clothes perfect and the whole production design sleek in a very mannered way – and the performances always restrained rather than shrill. There is a vast array of characters – from minor front-line anarchists through to the Prime Minister – though Calabresi is essentially the central character.

Valerio Mastandrea – usually decked out in a natty polo neck sweater under his suits – is a stylish presence and has the right sense of innate intelligence to carry the role and is nicely complemented by the bearded Pierfrancesco Favino as the pacifist anarchist Pinelli. Though beautifully staged, Piazza Fontana: The Italian Conspiracy is intriguing rather than entertaining and watchable rather than compulsive.